The European Union on Monday imposed sanctions on three companies — one Turkish, one Kazakh and one Jordanian — for breaching the UN arms embargo on Libya, drawing an angry reaction from Turkey. At a regular meeting in Brussels, EU foreign ministers signed off on the measures, which freeze any EU assets held by the…”
Yusuf
World News 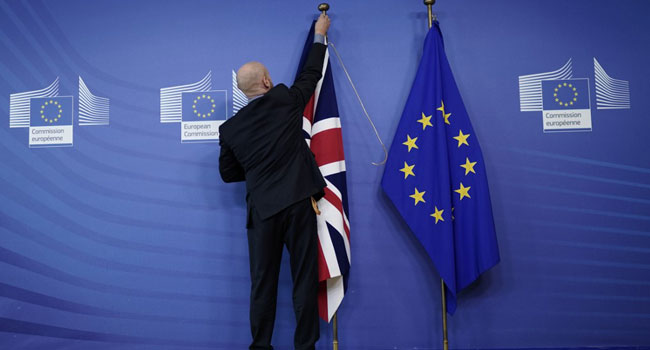 The European Union on Monday imposed sanctions on three companies — one Turkish, one Kazakh and one Jordanian — for breaching the UN arms embargo on Libya, drawing an angry reaction from Turkey.

At a regular meeting in Brussels, EU foreign ministers signed off on the measures, which freeze any EU assets held by the companies, cut them off from EU finance markets, and bar them from doing business with anyone in the bloc.

Two individuals were also hit with sanctions for human rights abuses in Libya, where the UN-recognised government in Tripoli has been under attack from strongman Khalifa Haftar, who runs a rival administration in the east.

The EU has a naval mission operating in waters off Libya which is tasked with policing the embargo and collecting intelligence on violators.

“These new listings show the EU’s strategic use of its sanctions regime and ability to react to developments on the ground in support of the political process and to deter past and present perpetrators from further violations,” the EU said in a statement.

Libya has endured almost a decade of violent chaos since the 2011 NATO-backed uprising that toppled and killed veteran dictator Moamer Kadhafi.

But there have been signs of progress, with representatives from the two sides meeting for peace talks in Morocco, announcing a surprise ceasefire and pledging national elections.

“After many months I see a reason for cautious optimism. There is a positive momentum, there is a ceasefire and we need to use it,” EU diplomatic chief Josep Borrell said as he arrived for the foreign ministers’ talks.

– Turkey attacks ‘wrong decision’ –
But the targeting of a Turkish company risks inflaming already tense relations between Ankara and the EU following a recent flare-up in the eastern Mediterranean over oil and gas reserves.

The EU says the company, Avrasya Shipping, operates a vessel called the Cirkin, which it says breached the arms embargo by transporting military material to Libya in May and June 2020.

Turkey lashed out at the decision in a statement from the foreign ministry late on Monday.

“At a time when efforts are made to reduce tensions in the eastern Mediterranean, making such a wrong decision is extremely unfortunate,” it read.

It also accused the EU’s naval mission in waters off Libya, called Operation Irini, of “ignoring” shipments to Haftar, “especially by the UAE (United Arab Emirates)”

“The EU’s Operation Irini rewards Haftar and punishes the Libya government recognised by the United Nations,” said the statement.

The Government of National Accord (GNA) in Tripoli is backed by Turkey and Qatar, while Haftar has enjoyed the support of Russia, Egypt, the UAE and France.

“If the EU wants security and stability in the region, it should give up on its biased attitude and act in consultation and cooperation with Turkey,” the foreign ministry statement added.

Gunmen Attack “Save The Children” Office In Afghanistan

US, EU Locked in Trade Stalemate