Ismaeel Uthman THIS year’s Eid el Adha known as Ileya festival will likely be affected by the harsh economic condition being experienced by Nigerians, investigations have revealed.  There may not be elaborate celebrations of the festival by Muslims as a result of skyrocketing inflation which has resulted into high cost of foodstuffs, rams, goats…”
Yusuf
featured hero Osun 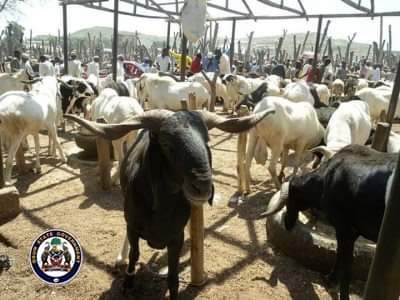 THIS year’s Eid el Adha known as Ileya festival will likely be affected by the harsh economic condition being experienced by Nigerians, investigations have revealed.

There may not be elaborate celebrations of the festival by Muslims as a result of skyrocketing inflation which has resulted into high cost of foodstuffs, rams, goats and chicken.

OSUN DEFENDER noted that the price of rams is on the high side in Osogbo and other parts of the state compared to the price they were sold last year.

This is just as the prices of rice, beans, yam flower and other foodstuffs appear unaffordable for common men whose incomes have been deflated by inflation and poor exchange rate.

Some residents of Osogbo who spoke with the medium on Wednesday and Thursday also noted that the current economic hardship would not afford them the opportunity of celebrating the Ileya festival as they want, maintaining that the price of ram which is an essential commodity for the celebration was very high.

The medium noted that ram dealers in Osogbo have reduced compared to last year when every junction and strategic locations were turned to ram’s market.

According to findings, the high price of ram and transportation cost from the northern part of the country to Osogbo discouraged a lot of people from the ram business this year.

In different interview with OSUN DEFENDER, some commercial truck drivers who transport rams and goats to Osun stated that the increment in the price of diesel is having reverberating effect on everything that is connected to the product in one way or the other.

The medium also visited Ifon market where there was a large depot of rams.

Some of the Muslims who spoke with the medium lamented the high cost of the rams, saying that they would not afford to buy the size of rams they wanted.

One of the Muslims, Mr. Sunkanmi Adeoti, said: “I came to this Ifon market from Osogbo. I was told I would get ram at a cheap price here. But the reality is that the price of ram is generally high. My budget for the ram I want to buy is N40,000. But with what I am seeing here, a N40,000 ram does not befit me; it is too small.

“How will I buy a ram that will not be enough for us to eat? I am tired of this country. Everything is just on the high side. Anyway, we will celebrate this Ileya as situation demands. It is heartbreaking that things are getting worse every year.”

Another Muslim who went to buy ram at Oja Oba market in Osogbo, Mr. Kareem Ajibade, told OSUN DEFENDER that he resolved to buy one ram as against two he bought last year because he could not afford to buy a second ram this year.

According to Ajibade, Nigeria’s economy has gotten worse to the extent that some people could not afford to eat two times daily not to talk of buying ram to celebrate Ileya festival.

He said: “I buy two rams every year; one for me and the other for my late dad. The budget for the two rams has always been N150,000. But this year, I can only afford to buy one ram. The reason is that, apart from the high cost of the rams, there is no money in circulation.

“What sense does it make if I buy two rams and start to struggle to buy foodstuffs and other things we need for the celebration. Inflation has led to increment in the price of everything. We should just live within our means and hope for a better 2023 Ileya festival.”

OSUN DEFENDER also noted that some people have resorted to contributing money to buy a cow instead of ram.

It is allowed in Islam for seven people to kill a cow for Ileya.