…As Osinbajo lauds Oyetola on good governance The State of Osun has received a sum of N100 million from Badger Mines, a Canada-based mining company, as sign- on fee for exploration and development of one of the state’s mining titles. The State Governor, Mr. Adegboyega Oyetola, disclosed this on Tuesday while delivering his address…”
Yusuf
Economy featured hero Osun 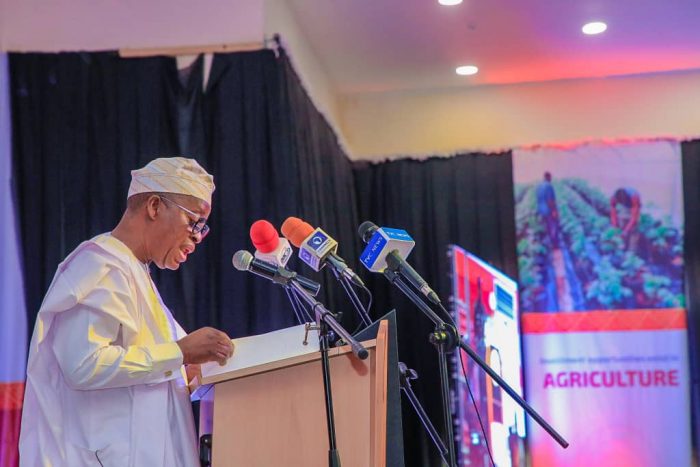 The State of Osun has received a sum of N100 million from Badger Mines, a Canada-based mining company, as sign- on fee for exploration and development of one of the state’s mining titles.

The State Governor, Mr. Adegboyega Oyetola, disclosed this on Tuesday while delivering his address at the opening ceremony of the three-day Economic and Investment Summit held at Aurora Event Centre in Osogbo.

The governor disclosed that the government had earlier executed a Memorandum of Understanding (MoU) with the renowned mining company as part of necessary preparation for the commencement of mining operations in the state.

Oyetola, who expressed optimism that the summit would achieve the desired results going by the positive responses obtained so far from key players in the private sector, said the government is fully prepared to give all the support required for investment to thrive, particularly in mining, tourism and culture and agriculture.

He said, “Our mining sector, like agriculture, is an old industry yet to be fully harnessed. The State of Osun has ample reserves of a variety of minerals, notably gold, lead/zinc, quartz, feldspar and several precious metals.

“We occupy a unique place in the mining sector in Nigeria. We are a mining state that hosts solid minerals. We are also a state that has invested in acquiring the licences for solid minerals under our land from the Federal Government.

“No other state in Nigeria can offer the unique combination of both regulatory and commercial fusion. We are a risk-ready state with an appetite for enterprise and reward for winnings.

“The state acquired 17 mining licenses for Gold – 10; Quarry – 4; Lead/Zinc – 2; and Quartz and Feldspar -1, from the Nigeria Mining Corporation, and we are willing to partner with interested local and foreign investors to develop these mineral resources.

“Our policy for the mining sector is implemented and overseen by the Osun Solid Mineral Development Programme. This programme commenced in June 2019, and has already achieved some encouraging milestones in its First Quarterly Report in 5 of the 7 intervention project areas of the programme.

“The intervention areas are Osun/Omoluabi Mining Business Restructuring Scheme (OMBRS) to commercialise the state-owned mining company. Osun Revenue Diversification and Maximisation Scheme (ORDMS) is a scheme to register all miners, mines and mining equipment and report on all mining activities in the State in partnership with private sector technology partners.

“We are happy to report that 9,000 artisanal miners have registered their biometric data on RFID-enabled tags with our technology partners. I am also happy to inform you that Osun recently executed an MOU with the renowned international mining firm – The Badger Mines – for the exploration and development of one of our mining titles with a signature bonus of a Hundred Million Naira (N100m) already paid.”

In his remarks while declaring the three-day summit open, the Vice President of Nigeria, Professor Yemi Osinbajo, commended the state government for hosting the event, which he described as impressive and organised.

Osinbajo, who was represented by the Senior Special Assistant to the President on Trade and Investment, Dr. Jumoke Oduwole, also lauded the governor for providing what he described as focused inspirational and well-meaning leadership in the state.

He said, “I am particularly very delighted visiting Osun, widely acclaimed for its rich cultural heritage, hospitality and the enterprising tradition of her people. Peaceful, virtuous, resilient and vibrant, Osun is a pride of the nation.

“As a choice tourist destination, Osun is certainly most enriched in terms of its widespread iconic tourists’ sites, globally-acclaimed festivals such as the popular Osun Osogbo festival, Olojo festival, among many others.

“Aside its fertile land which makes agriculture thrive unusually, the array of its mineral-resource blessednes, Osun is also fortunate to be home to some of the nation’s most highly gifted and accomplished citizens. Undoubtedly, Osun is a profoundly blessed State.”

The Vice President further noted that the objectives of the Summit is in tandem with the Diversification Agenda of the Federal Government, adding that the governor has demonstrated exceptional leadership in building on the achievements of his predecessor and particularly in his aggressive pursuit of economic rejuvenation of the state.

Also speaking on the occasion on behalf of the traditional rulers, the Ooni of Ife, His Imperial Majesty, Oba Adeyeye Enitan Ogunwusi, Ojaja II, implored all indigenes of the state to support the government in its frantic bid to make the state the economic hub of the country.