There is a whirl of activity online at the moment as Kenyans try to “find” their old school mates to stand by them in case they are required to prove that they did in fact attend school and sat national examinations. It is all a light-hearted mock of the serious situation in which the Governor…”
Editor
Op-Ed 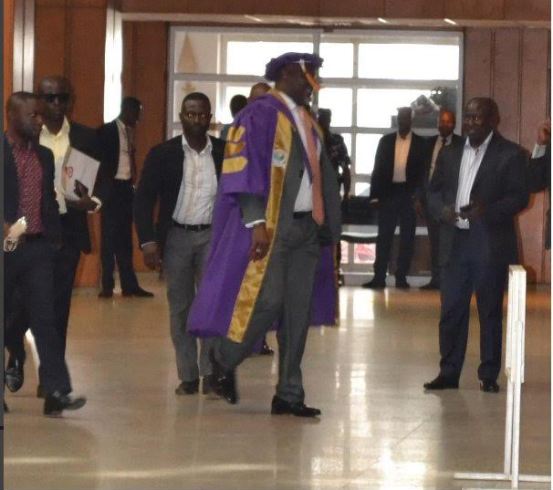 There is a whirl of activity online at the moment as Kenyans try to “find” their old school mates to stand by them in case they are required to prove that they did in fact attend school and sat national examinations.
It is all a light-hearted mock of the serious situation in which the Governor of Mombasa, Ali Hassan Joho, has found himself in.

Police are investigating whether Mr Joho forged his Kenya Certificate of Secondary Education (KCSE) as alleged by the Kenya National Examinations Council.
He denies any wrongdoing but if these allegations are proven, Mr Joho could be in danger of criminal charges and could be stripped of the degrees he subsequently obtained at university.

A person vying for the position of governor is required by law to hold a degree from a recognised university.
This means Mr Joho could potentially be locked out of the race to defend his seat in the August general election.
It is this last point that leads Mr Joho to describe the whole situation as attempts to intimidate him.

Mr Joho, who is a member of the opposition ODM party, is a fierce critic of the ruling Jubilee Party government and is never afraid to clash publicly with the president.
It is unlikely that the learned men and women who drafted the 2010 constitution of Kenya had Mr Joho in mind when they included a university degree requirement for holders of the office of president, governor and deputy governor.
The thinking was that the president is the CEO of the country while governors are the CEOs of Kenya’s 47 regional county governments.
These positions require governance experience and a visionary leadership that is partly the product of a mind broadened by education. But perhaps the big issue the constitution was trying to address was the culture of the 1980s and early 1990s, when the Kenyan president tended to be surrounded by half-educated sycophants.

These handfuls of men who had the ear of the president were so powerful they could influence public policy on just about anything.

Arresting Marx?
The story is told of how in a bid to stem anti-government sentiments at public universities, one of these semi-literate leaders said: “The government has enough resources to hunt down and arrest this Karo Makisi who is inciting the students to riot”.

The poor politician was convinced that Karl Marx was a man physically present at the universities and was causing trouble for the government.

No-one had educated him on popular social, economic and political ideologies.
Another of the inner-circle politicians who barely went to school is famously said to have proposed a great solution to the frequent unrest and clamour for political change taking place in public universities.
“If all that the students want is dayarog, they should be given the dayarog to eat so that calm returns to the institutions.”
He mistook the students’ demand for dialogue as a type of food that was missing from their menu.

This is how far Kenya has come in the evolution of its political leaders.
Now fearful of being barred from running for the lucrative position of governor, many politicians who did not go to university have been studying day and night to obtain degrees.

Long-lost classmates
But based on experience of poor leadership, Kenyans know that a university degree does not define a leader nor guarantee competent leadership.

Some of the worst cases of mismanagement of resources and abuse of power have involved highly educated people.
On the contrary, Kenya has in the past witnessed brilliant leaders who were elected into office without degrees and who have gone on to personify exemplary leadership.

The constitution of Kenya has another provision on leadership and integrity.
This requires people vying for public office to be elected on the basis of personal integrity, selfless service and honesty.

However, these core leadership principles have been reduced to a mere process of certifying that the candidate is of good conduct and free from corruption charges.

The clearance procedure is open to manipulation and abuse, and judging by the number of leaders who have been involved in grand corruption over the last five years, it is an exercise in futility.

So Kenyans can be forgiven for turning Mr Joho’s education pain into a national pastime online.

Andrew Yakubu Was A Country By Emmanuel Ugwu

Okada Accidents And A Wailing President, By Tunde Odesola

Our Mumu Must Not Push Nigeria Off The Cliff