De Gea Will Play For United Against Huddersfield, Says Solsjkaer

Manchester United manager Ole Gunnar Solsjkaer has insisted that David De Gea will retain his place for Sunday’s trip to Huddersfield despite the goalkeeper’s recent errors. Solskjaer said Friday that the Spain international has been “fantastic” for United this season, even though he has not kept a clean sheet for 13 matches. Sergio Romero, De…”
Yusuf
Sports 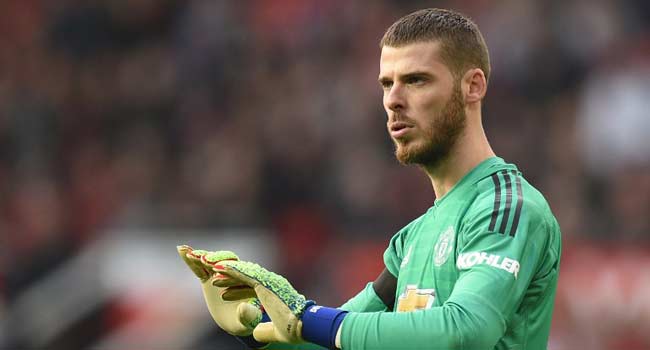 Manchester United manager Ole Gunnar Solsjkaer has insisted that David De Gea will retain his place for Sunday’s trip to Huddersfield despite the goalkeeper’s recent errors.

Solskjaer said Friday that the Spain international has been “fantastic” for United this season, even though he has not kept a clean sheet for 13 matches.

Sergio Romero, De Gea’s deputy, is not available for the Huddersfield match after suffering a knee injury in training on Thursday.

A De Gea mistake led to the goal that allowed Chelsea to gain a 1-1 draw at Old Trafford last Sunday, with the goalkeeper spilling Antonio Rudiger’s shot, giving Marcos Alonso the chance to score with the rebound.

Failure to win that match has severely damaged United’s chances of securing the top-four finish they need to qualify for next season’s Champions League; they are currently in sixth position, three points behind fourth-placed Chelsea with two games to play.

“He will play,” Solskjaer said of De Gea. “Sergio was injured yesterday (Thursday) and didn’t train. David’s been training well this week and he will play.”

Solskjaer, a former United striker, gave De Gea a vote of confidence by adding: “Of course I trust him. He has been fantastic this season.

“Towards the end of the season, he’s been in headlines for the wrong reasons but he has to deal with that. The goalkeeping department are a fantastic group. They are such a tight-knit group.

“They have experienced better times than just now but David is ready for Sunday. David’s confident, and he is looking forward to the next few games. He wants to prove what a good goalkeeper he is. With the performances he has put in over the past few years, David has got all my confidence.”

However, asked if Romero might have started had he been fit, Solskjaer said: “It’s ifs and buts and hypothetical questions. Sergio knows how highly I rate him.”

Meanwhile, Solskjaer acknowledged United’s goalscoring record had to improve if they are to stand any chance of climbing the table before the season draws to a close.

Marcus Rashford has gone six games without scoring, while fellow forward Romelu Lukaku has not found the net in eight matches.

But he said the quality of United’s performances has not dipped as much as suggested by a recent run of just two wins in their past 10 matches in all competitions.

“We haven’t scored enough of the chances we have created, but that happens,” Solskjaer, who replaced the sacked Jose Mourinho earlier this season, said.

“At the beginning, when I came in, we were more efficient in terms of scoring chances created.

“Now that has maybe changed for us a bit. The margins and details are maybe going against us. We need to look behind the results,” Solskjaer insisted. “It’s not been so up and down.

“As a team and as a striker, you’re always facing the little margins there,” the former forward explained.

“We’ve been working on creating chances and scoring.”

France forward Anthony Martial has also gone six games without scoring and has faced criticism for his performances since he signed a five-year contract in January.

But Solskjaer said: “Anthony has got goals in him. He’s got loads of goals in him. It’s up to us to move it forward and get that into him again.

“I’m sure we will see him scoring goals for Manchester United in the future… We’ve got loads of goals in our team.”

Super Eagles Coach Has Not Been Sacked – Sports Minister