Minister of Interior, Ogbeni Rauf Aregbesola, has described how the Federal Government disappointed world ‘experts’ who had predicted that Nigeria and other African countries would collapse under the damaging economic effects of COVID-19 pandemic that crippled world economies and collapsed health systems in well developed countries. Aregbesola made this assertion whilst delivering the Third…”
Yusuf
Education hero 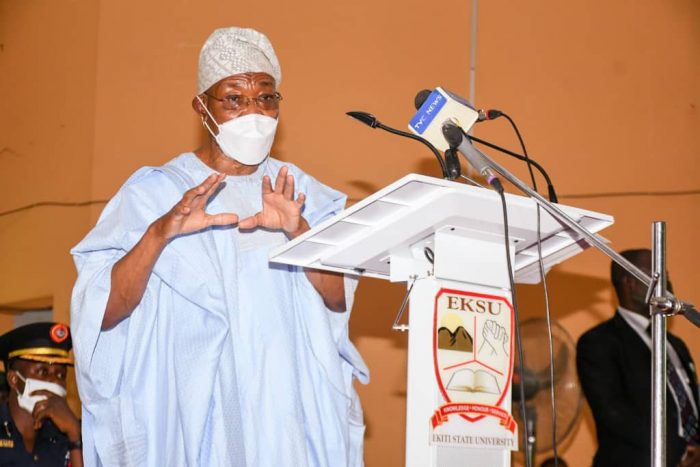 Minister of Interior, Ogbeni Rauf Aregbesola, has described how the Federal Government disappointed world ‘experts’ who had predicted that Nigeria and other African countries would collapse under the damaging economic effects of COVID-19 pandemic that crippled world economies and collapsed health systems in well developed countries.

Aregbesola made this assertion whilst delivering the Third Annual Lecture of the Faculty of Arts’ of the Ekiti State University, Ado Ekiti titled, COVID-19: The Economy and Security, on Monday in Ado, the Ekiti State Capital.

The Minister stated that the enforcement of non-pharmacetical policies of lockdown, isolation, stopping interstates movements, maintaining social distance, wearing of face-masks and aggressive public enlightenment, proved to be effective in significantly halting the spread of the disease.

“COVID-19 hit us but the government was able to miligate the consequences. It also brought out the capacity of the Nigerian people for resilience in the face of adversity, and the milk of human kindness in the way a lot of our compatriots demonstrated generosity and acts of kindness to the less privileged in our midst.

“The Federal Government empanelled the Presidential Task Force which immediately swinged into action, coordinating with the NCDC and the Ministry of Health, all of government’s response and holding daily national televised briefing,” the minister noted.

Aregbesola noted that the fatalities recorded, though much regretted, could have been worse, in light of the projection by the Bill and Melinda Gates Foundation and the WHO that Nigeria, among some other developing countries, would suffer heavy casualties from the disease. He noted that Bill Gates was later reported to have heaved a sigh of relief that his prediction of mass casualties was falsified.

The minister who commended scientists and all other who work in the health sector for properly managing the pandemic and also developing a vaccine in record time to assist humanity. He subsequently advised Nigerians to go out enmasse to be vaccinated at the various vaccination centers across the country.

On the economy, the Minister applauded the efforts of the Private Sector led Coalition Against Covid-19 (CACOVID) for the tremendous work done to assist government and Nigerians in militating against the effect of the Pandemic. He also noted that in April 2020, the Federal Government commenced the transfer of N20,000 to poor and vulnerable households registered in the National Social Register (NSR).

“The NSR was increased from 2.6 million households (about 11 million people) to 3.6 million households during the Covid-19 crisis. In same April, the Federal Ministry of Humanitarian Affairs Disaster Management and Social Development began the provision of food rations to vulnerable households in the four states put under lockdown.“

He further stated that the CBN, taking proactive measures, pledged to pump NGN1.1 trillion into critical sectors of the economy.

“The Federal Government commenced a three-month repayment moratorium on all TraderMoni, MarketMoni and FarmerMoni loans. This makes eminent sense. These beneficiaries could not have been in good positions to repay the interest-free loans they collected when the economy was being shut down and the streets were empty.“

Ogbeni Aregbesola stated that as a result of government’s stimulus package, 1.3 million jobs were saved while close to one million new jobs were created through the Economic Sustainability Plan anchored by Vice President Yemi Osinbajo on behalf of the Federal Government.

Earlier, Vice Chancellor of the Ekiti State University, Professor Edward Olanikeku, commended the Minister of Interior, Ogbeni Rauf Aregbesola for honouring the invitation of the school. He advised students, members of staff and all Nigerian to keep to the COVID- 19 protocols by taking the vaccine and the constant use of facemasks and other non-pharmaceutical measures.

Also speaking, the Chairman of the occasion, Honourable Speaker of Ekiti State House of Assembly, Hon. Funminiyi Afuye, noted that COVID-19 has a negative effects to Nigeria economy and security, because shortly after easing of lockdown occasioned by the pandemic, some hoodlums vandalised public and private properties under the EndSARS protest.

Nigerians Must Be Mobilised For Productivity – Aregbesola