………As Lagos, Osun Governors Renew Calls For Regional Integration. The Lagos state Governor, Akinwumi Ambode, has declared his administration support for Governor Rauf Aregbesola’s developmental agenda in Osun. Ambode disclosed this on Thursday while on a courtesy visit to Aregbesola at the Government House in Osogbo. This was even as the two governors renewed the…”
Editor
Economy featured hero News Oduduwa Osun Politics 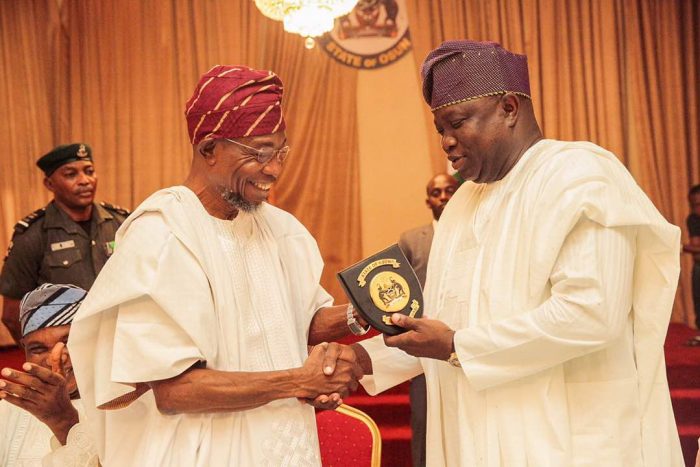 Ambode disclosed this on Thursday while on a courtesy visit to Aregbesola at the Government House in Osogbo.

This was even as the two governors renewed the calls for and reaffirmed their commitments towards the actualisation of South-West regional integration.

He said his administration would do everything possible to support Governor Rauf Aregbesola of Osun at ensuring the success of his government.

In a statement signed by Director, Bureau of Communication and Strategy, Mr Semiu Okanlawon, quoted the two governors as making the calls for regional integration as only way to go.

Ambode was quoted in the statement as saying it was time for the region to fully exploit its potential by standing by what Aregbesola of Osun has been championing since the beginning of his administration.

He stated that the Lagos state government is fully committed to the regional integration of the South West for its economic potential to be fully harnessed and sustained.

The Lagos State Governor added that the time is right for all well-meaning indigenes of the region to rally round and ensure that the South West begins to rely on its economic endowments as means of being independent.

He said, “We have an historic duty to join Aregbesola in championing what he has been clamouring for, which is the integration of the South west.

“I fully commit myself to the integration of the South-West because I believe it is the only way the region can fully explore its potentials for the benefit of all.

Ambode highlighted the developmental strides of Aregbesola in Osun, saying the Governor has laid unprecedented marks of development in the state.

He commended the Governor for being steadfast to weather the financial storm and challenges the state is passing through, while assuring the Osun government that Lagos State will support Osun with what it can to the end.

He urged Aregbesola to continue the good work, saying the reward of hard work is more work while also charging the Governor to ensure that the legacies are not destroyed.

“We are in consonance with what Aregbesola is doing in Osun.  I cannot begin to define how Osun has developed under this administration.

“I am particularly amazed by commitment to developing the state despite the tough economic challenges the state is passing through.

“I want to assure you that Lagos State Government will continue to support Osun till the end with all it can. I don’t want the development to stop and he should be reminded that the reward for hard work is more work.” Ambode stated.

Aregbesola stated that the call for the regional integration of the South West must be taken beyond mere rhetorics, stressing that all the South West governors must work towards actualising it before the end of their current tenures.

The Osun governor said the only state that can survive on its own is Lagos, which he said is not too good because other states in the South West will be over dependent on Lagos if that happens.

He said it is in the interest of Lagos and other states in the South West to clamour for the regional integration in all aspects of life.

“There can be no meaningful development in the South west without the integration of the region.

“It is the only way we can fully take advantage of the comparative competitiveness that exists in our region.  That is why we commend the efforts of the Lagos State Government on the move for regional integration.

“It is time for us as a region to take the issue of regional integration beyond mere rhetoric, we need to actualise it before the end our various tenures.

“I want us to set the shortest period of our tenure as the deadline to actualise the dream because it is the best for this region.”

“We must pursue the clamour for the southwest regional integration to advance social-economic, political and education relationship for the comparative competitiveness,” Aregbesola said.

STRIKER: A Damning And Sustained Decline