President Muhammadu Buhari bypassed no fewer than 24 top senior Nigerian Army officers to appoint Major-General Farouk Yahaya as the Chief of the Army Staff, according to a document, Seniority Roll Nigerian Army Officers 2021 (Revised). Checks on the army’s document showed that majority of the officers in line of seniority following the late Chief…”
Yusuf
News Tits Bits 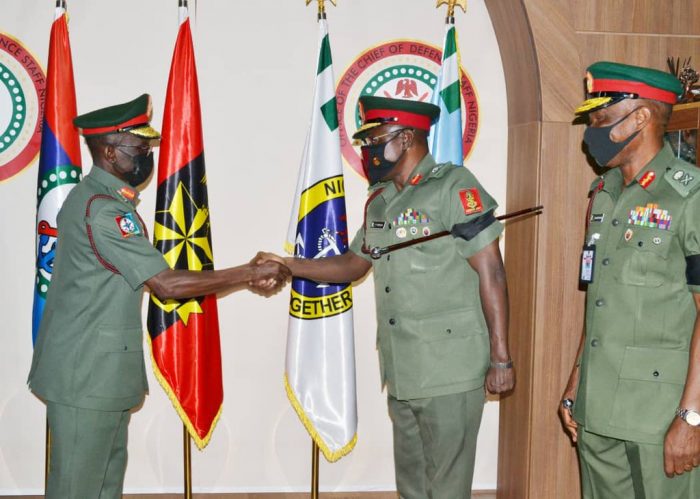 Checks on the army’s document showed that majority of the officers in line of seniority following the late Chief of Army Staff, Lt Gen Ibrahim Attahiru, are from the South-West or South-East.

The President, by appointing Yahaya, hitherto the Theatre Commander of Operation Hadin Kai in the North-East and from Regular Course 37, puts the 24 top army officers from Regular Courses 35 and 36, on the path of forceful retirement.

The officers in seniority rank ahead of Yahaya are: “Major Generals J. O. Olawumi from Ekiti, J. O. Akomolafe from Kwara, C. O. Ude from Enugu, J. Oyefesobi from Ogun, M. O. Uzoh from Abia, C. C. Okonkwo from Imo, M. S. A. Aliyu from Zamfara, U. M. Muhammed from Niger and B. M. Shafa from Ogun.”

While Olawumi and nine others – Akomolafe, Ude, Oyefesobi, Uzoh, Okonkwo, Aliyu, Muhammed, Shafa and Angbazo were promoted to the rank of Major General in 2016, Yahaya and others did not become Major Generals till 2017.

When Buhari appointed the present crop of service chiefs only in January, no fewer than 20 generals from the three services who were members of courses 34 and accepted 35 were retired to pave way for them.

From as far back as 2015, as Buhari began to make his early appointments, there have been public outcries of nothernisation agenda which the President has done little or nothing to prove wrong with subsequent appointments.

In 2018, former President Olusegun Obasanjo wrote an open letter to Buhari, asking him not to bother to seek re-election.

In the letter, the former President cited among others, Buhari’s “nepotistic deployment bordering on clannishness”. Also, a retired Colonel Abubakar Umar, former military governor of Kaduna State, accused Buhari of nepotism, saying it could tear the country apart.

“Nigeria has become dangerously polarised and risks sliding into crisis on account of your administration’s lopsided appointments, which continue to give undue preference to some sections of the country over others,” Umar said

Breaking: Army, Police Take Over Kaduna Ahead Of NLC Protest

FOR THE RECORD: Yoruba Summit And The Call For Regionalism