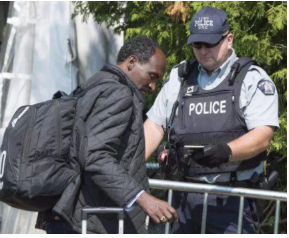 The Canadian government had revealed that it was  making plans to curb the number of asylum seekers especially from Nigeria who are flooding into Canada via the United States.

Recall that the country special interest in Nigeria is due to the fact that Nigeria presently had the highest number of asylum seekers into the country. According to Immigration Minister Ahmed Hussen, about 2,500 migrants, mostly Nigerian nationals, entered Canada illegally in April, bringing the total so far this year to more than 7,300.  They crossed on foot along a forest trail from New York state to Quebec province.

He will travel to Nigeria in the coming days to press the issue. At Ottawa’s request, US authorities have also recently tightened their visa rules for Nigerians to try to prevent tourists from flying to the US and then hopping across the border to file Canadian refugee claims.

An average of 70-80 migrants per day have been making the trip of late, said Public Safety Minister Ralph Goodale. Nearly 21,000 border jumpers were intercepted by federal police in 2017 and allowed to file a refugee claim.  “Just over 90 percent of irregular migrants do not meet our criteria (for asylum) and they will have to leave Canada,” Garneau said, adding that 200 currently face imminent deportation after their refugee claims were rejected.

The first arrivals in 2016 were mostly Haitians who faced repatriation at the end of US temporary special protections granted after storms battered their desperately poor island nation.  But the wave expanded last year to also include Djiboutian, Eritrean, Nigerian, Pakistani, Sudanese, Syrian, Turkish and Yemeni nationals, among others.

The border jumping started with the election of US President Donald Trump, who promised to expel more than 11 million undocumented migrants.

APC Will Win All South-South States In 2023 – Omo-Agege