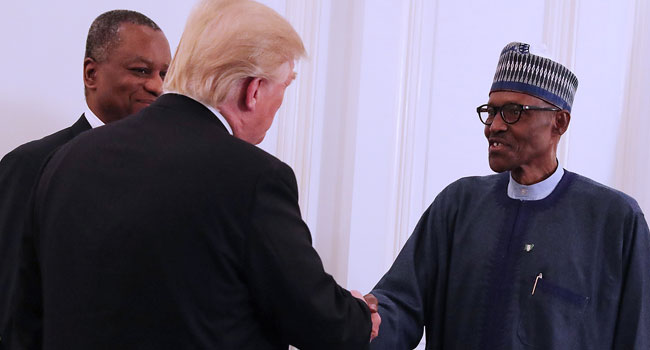 President Muhammadu Buhari will today be meeting with United States President, Donald Trump in Washington to hold talks on security and the economy.

President Buhari will be the second African leader to be received by Trump’s White House administration, after Egyptian President, Abdel Fattah Sisi.

According to a White House statement, the talks will focus on fighting terrorism and insecurity, economic growth and democratic development in Nigeria, set to hold presidential polls in February next year.

Trump’s relationship with the continent suffered a further setback in March when former secretary of state Rex Tillerson was fired while in Nigeria on his first trip to the continent.

As a result, the visit revealed little about Trump’s Africa policy.

Nigeria is entering its ninth year fighting Boko Haram extremists, who have devastated the northeast of the country and killed over 20,000 people in a bloody quest to establish an Islamist state.

Buhari is also battling a so-called herdsmen crisis, a sectarian conflict hardening along religious lines that has claimed scores of lives this year in escalating violence.

“I think both sides have a clear agenda in this meeting and its security and economic issues. They both have something to gain,” J. Peter Pham, director of the Africa Center at the Washington-based Atlantic Council, told AFP.

All eyes will be on Trump after he earlier called African nations “shithole” countries, a damaging remark he has since denied.

“On President Trump’s side, it’s definitely putting that controversy behind him,” Pham said.

“On President Buhari’s side, it’s having the prominence of being the first African leader received at the White House in this administration.”

– Improved relations –
In spite of Trump’s remarks, Nigeria’s relationship with the United States has improved since he came into office, according to Lauren Blanchard, African affairs specialist with the Congressional Research Service.

“(The visit) is intended to signal that the United States continues to see Nigeria as one of its most important partners on the continent,” Blanchard said.

“Cooperation has improved over the course of President Buhari’s tenure but not as fast as both sides would like,” she added.

Buhari, who like Trump has a tendency to make gaffes, had lambasted former President Barack Obama shortly after coming into the office for refusing to sell Nigeria weapons to fight Boko Haram.

“Unwittingly, and I dare say unintentionally, the application of the Leahy Law Amendment by the United States government has aided and abetted the Boko Haram terrorists,” Buhari said during a visit to Washington.

Under the legislation, the US is prevented from offering weapons or training to countries where there is credible information of human rights abuses by authorities.

In contrast, Trump’s administration has gone ahead with the reported $496 million sales of up to a dozen Super Tucano aircraft, a plane with surveillance and attack capabilities, set to be delivered in 2020.

The deal has recently come under scrutiny in Nigeria, a country with endemic corruption, where lawmakers are accusing the president of illegally withdrawing funds to purchase the planes.

– Re-election momentum –
While no major trade announcements are expected, Trump and Buhari will also be talking about ways to deepen economic cooperation.

“There is the security element and the economic element that dovetails with Trump’s agenda to push American business,” said Pham.

Buhari, who is seeking re-election in 2019, is likely to play up his administration’s agriculture reforms and underline his commitment to democracy.

This trip will also be used by his government to underscore that Buhari is fit for office after a series of health scares during his tenure.

“It undercuts the ‘Baba go slow’ narrative,” said Pham, referring to a nickname given to Buhari for his slow pace in office. “It’s a build-up to his re-election campaign.”

The 75-year-old former military ruler was Nigeria’s first opposition challenger to defeat an incumbent in a largely fair poll.

His election as president triggered a wave of optimism for oil-rich Nigeria, which has Africa’s biggest population but wrestles with rampant corruption and poor governance.