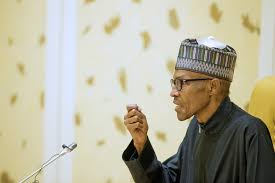 Malam Garba Shehu, the President’s Senior Special Assistant on Media and Publicity, in a statement issued in Abuja, said Buhari spoke on “Towards a Comprehensive Approach to Combat the Transnational Threat to Terrorism”.

The President maintained that “concerted efforts must be made to not only dismantle the network between transnational organised crimes and terrorist organisations, but also to block the payment of ransom to terrorist groups.

While recalling the UN Resolution 1373 which stressed that “any person who participates in the financing, planning, preparation or perpetration of terrorist acts should be brought to justice”, he said Nigeria remained committed to supporting counter terrorism efforts within the African Union and the United Nations.

The Nigerian leader called for resolute and coordinated initiatives by developing an AU data base of persons or groups and entities involved in terrorist acts for use by law enforcement agents.

“”Nigeria believes that the timely establishment of this tool at the continental level will be strategic in this fight,’’ he added.

He also condemned the continued activities of the terrorist groups in Africa, and around the world and called for more concerted action by the African body and the international community to address the global scourge.

According to him, in doing that, the conditions that are conducive to the spread of extremism, radicalisation and terrorism must first be addressed.

He added that collaborative measures must be taken to disrupt the recruitment of terrorists, their financing networks and the movement of foreign fighters.

President Buhari disclosed that Nigeria had enacted domestic anti-terrorism laws that also deal with related issues such as kidnapping, drug peddling and gun-running.

He, however, noted that, “terrorism cannot be defeated only through military force and law enforcement measures.

“We need to adopt a multifaceted approach of good governance, economic development and creation of job opportunities for our youth.”

Linking terrorist activities to climate change, the President reiterated Nigeria’s “important call for global action to support the recharging of the Lake Chad Basin,” which had shrunk by over 80 per cent.

Shrinking Lake Chad.
He noted that this had impacted negatively on the livelihood of millions of people in the countries of the Basin.

“”There is considerable evidence that the environmental state of the Lake contributed to the radicalisation of jobless youth who joined Boko Haram,’’ he further stated.

In their submissions, the Chairperson of the AU Peace and Security Council, President Abdel Fattah el-Sisi of Egypt, the African Union Commission Chairperson, Moussa Faki Mahamat, and the United Nations Secretary-General, Antonio Guterres, agreed on the real threat of transnational terrorism.

They therefore stressed the need for global efforts to curb the negative trend.