Following incessant attacks of Fulani herdsmen on farmers, and members of various communities all over the country, President Muhammadu Buhari on Monday, March 5, 2018, directed that any Fulani man found in possession of AK-47 rifles should be charged to court. The President gave this order during a visit to Jalingo, the Taraba State capital…”
Editor
News 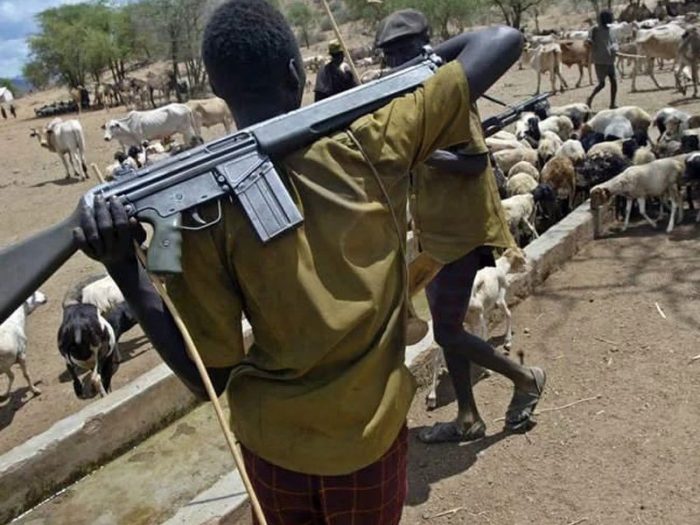 Following incessant attacks of Fulani herdsmen on farmers, and members of various communities all over the country, President Muhammadu Buhari on Monday, March 5, 2018, directed that any Fulani man found in possession of AK-47 rifles should be charged to court.

The President gave this order during a visit to Jalingo, the Taraba State capital during a to commiserate with people that lost loved ones in the wake of violence that engulfed the area recently.

“Any Fulani man caught with AK-47 should be charged to court.”

He said he will soon embark on the same visit to Zamfara and Benue states, also to condole with those who lost their loved ones.

The President called on the traditional rulers in the state to go to their chiefdoms and preach peace among their subjects for peaceful coexistence among their people.

He said traditional rulers in Nigeria were the main land lords, while politicians like himself as the President and Governor Darius Ishaku of Taraba State were visitors who might not stay on their seats for ever.

“Any Fulani man caught with AK-47 should be charged to court. You, the traditional rulers are going to remain on your stools till you die; Ishaku (the governor) and I may not last on our seats for long but you are going to be there till you die.

“Please go to your domains and initiate peace among your people. These killings will not help us,” President Buhari said.

The representatives of Yandan, Fulani and Mambila tribes who were allowed to speak on the occasion, called on the President to instil justice in the land for the people to live in peace.

Earlier in his comment, Taraba State governor, Darius Ishaku, appreciated the President for finding time to visit the state for condolences.

Ishaku said the crisis in the state had hindered speedy development which the state government initially initiated.

He pleaded with with the President to mobilize more security personnel in the state to forestall further crisis among the people.

President Muhammadu Buhari is planning more trips to Benue, Taraba, Zamfara, Yobe and Rivers states, which have recorded different forms of violence in 2018.

The development comes weeks after the President was criticised for not visiting the states to sympathise with the people.

On Saturday, images of the President at a wedding ceremony in Kano sparked negative reactions on social media.

Femi Adesina, Special Adviser to the President on Media and Publicity, disclosed news of the President’s visit to the state in a statement yesterday.

This is even as Benue State Government stated yesterday that the visit will afford the people ample opportunity to table their problems before the President, as President Buhari started the assessment with a visist to Taraba yesterday.

On the President’s proposed visit to the troubled states, Adesina said: “In view of recent terrorist attacks, criminal activities and communal clashes in some states leading to tragic loss of lives and kidnapping of 110 schoolgirls, President Buhari immediately tasked the Armed Forces and other Security agencies to compile comprehensive reports on the various incidents.

“Having received and studied the reports, the President has decided to undertake an on-the-spot assessment of the various occurrences and to meet and console the communities affected.

“From today, March 5, he will visit Taraba, and subsequently Benue, Yobe, Zamfara and Rivers states.

“The President calls on all Nigerians, especially those in the affected areas, to cooperate fully with the security agencies to enable them curb the spate of crimes, bring those responsible to justice and prevent further occurrences.”