Following recent development by the Zimbabwe military warning the President Mugabe to detest from gimmicks to aid his wife Grace from being his successor, four army tanks have been seen heading toward the Zimbabwean capital Harare. Recall that Gen. Constantino Chiwenga, commander of Zimbabwe Defence Forces, said he was prepared to “step in” to end…”
Editor
News 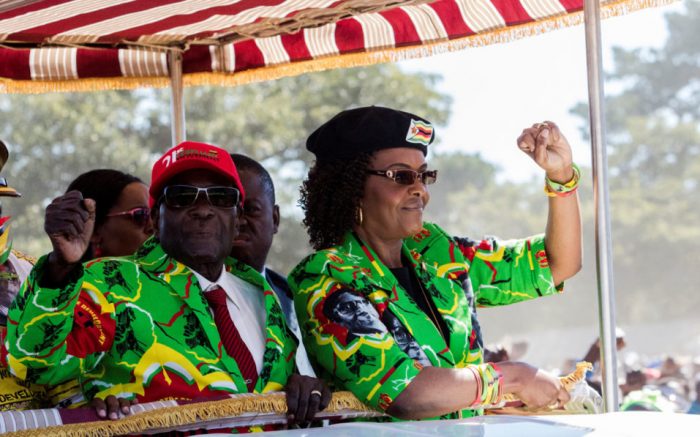 Following recent development by the Zimbabwe military warning the President Mugabe to detest from gimmicks to aid his wife Grace from being his successor, four army tanks have been seen heading toward the Zimbabwean capital Harare.

Recall that Gen. Constantino Chiwenga, commander of Zimbabwe Defence Forces, said he was prepared to “step in” to end a purge of supporters of ousted vice-president Emmerson Mnangagwa.

A witness saw two other tanks parked beside the main road from Harare to Chinhoyi, about 20 km from the city.

Witnesses said one of the tanks, which was pointed in the direction of the capital, had come of its tracks. Soldiers on the scene refused make comments.

Chiwenga on Monday warned that the military would not hesitate to step in to end purges against former liberation war fighters in President Robert Mugabe’s ruling party after Mnangagwa was stripped of his vice president’s post.

Chiwenga’s statement, read out at a news conference packed with army top brass, comes at a time of a deepening rift within ZANU-PF over who will eventually lead the party after the 93-year-old Mugabe goes.

Mnangagwa’s removal provides a boost for Grace Mugabe, the wife of the president, who is supported by the largely youthful G40 faction of ZANU-PF to succeed her husband.

Chiwenga said ZANU-PF had been hijacked by people who did not fight in the 1970s liberation war, a clear shot at G40 wing and Grace Mugabe who is a vocal critic of Mnangagwa.

“We must remind those behind the current treacherous shenanigans that, when it comes to matters of protecting our revolution, the military will not hesitate to step in,” Chiwenga said in a statement read to reporters at the news conference.

“The current purging … targeting members of the party with a liberation background must stop forthwith,” he said.

Mugabe’s 37 years in power has been anchored by support from the military, which has always said it will not back anyone for president who did not fight in the liberation war.

But Mugave has been accusing the generals of taking sides in the succession race.

It is rare for the defence forces to publicly take sides in the affairs of ZANU-PF. When Joice Mujuru, a war veteran and Mugabe’s deputy of 10 years, was sacked from the ruling party in 2014, the military remained quiet.

Political analysts however say the military stayed quiet then because the beneficiary of Mujuru’s downfall was the 75-year-old Mnangagwa, a war veteran.

Grace, now poised to become a vice president, did not fight in the liberation war.

The party appears split over the succession with the G40 faction supporting Grace and another faction, that includes war veterans, rooting for the ousted Mnangagwa.

Chiwenga said ZANU-PF had since 2015 been rocked by infighting, which had afflicted the economy, causing serious cash shortages and soaring prices of basic commodities – rare criticism of those in government by the military.

Analysts said if Mugabe responded to Chiwenga’s statement, he would be compelled to choose sides between war veterans and the young turks rallying behind his wife.

“He is in a corner. He has to declare his allegiance. If he condemns that statement, then he is saying therefore I am for the young turks against the war veterans,” said Eldred Masunugure, a political science lecturer at the University of Zimbabwe.

“What we are witnessing is the military saying: ‘We are willing to intervene if the red line is crossed’. It is a warning that the political class in ZANU-PF is about to cross that red line.”