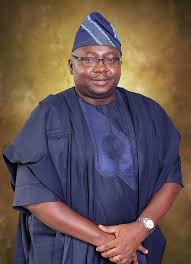 The Oyo state governorship candidate of the All Progressives Congress in the 2019 governorship election, Chief Adebayo Adelabu, fondly called Penkelemes, alongside some other notable aggrieved APC leaders have formally dumped the party.

Adelabu was also an aspirant in the just concluded APC governorship primary that produced Senator Teslim Folarin, representing Oyo Central Senatorial district as the candidate of the party.

The primary was keenly contested with Folarin polling 954 votes while Adelabu polled 327 votes.

The defectors announced their decision while addressing their supporters at Adelabu Campaign Office in Ibadan on Sunday.

Adelabu vowed to contest 2023 governorship election and assured his supporters of victory in next year’s election, saying: “We shall be successful. We will rescue Oyo State next year. We shall be victorious in 2023”.

All the party leaders who spoke at the meeting threw their supports behind Adelabu, saying,

“We are solidly behind you. On your mandate we shall stand, Bayo.

“We will follow you to any party you go to realise your governorship ambition in 2023. We shall use all what we have to secure your mandate during the elections in Ogbomoso, Ibarapa, Oke-Ogun and the rest to ensure that you become the next governor of Oyo State.”

Buhari Jets Out To Mauritania To Receive Peace Award

Osun Gov.’s Wife Undertakes Treatment Of Baby With ‘Hole In The Heart’