A journalist, Mr Yomi Olomofe, has told a Federal High Court, Lagos, how he was almost killed at Seme Command of the Nigeria Customs Service (NSC) for inquiring into smuggling activities. Giving oral evidence in a fundamental rights suit against the NCS, Olomofe gave graphic details of how he was brutalised at Seme border customs…”
Editor
News 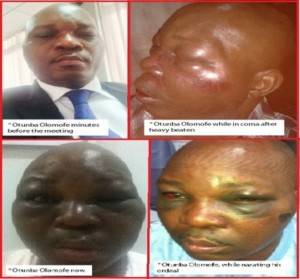 A journalist, Mr Yomi Olomofe, has told a Federal High Court, Lagos, how he was almost killed at Seme Command of the Nigeria Customs Service (NSC) for inquiring into smuggling activities.

Giving oral evidence in a fundamental rights suit against the NCS, Olomofe gave graphic details of how he was brutalised at Seme border customs command on June 25, 2015.

The Lagos branch of the Nigeria Union of Journalists (NUJ) had filed the suit on behalf of the Badagry-based journalist, seeking enforcement of his fundamental rights to life, freedom of expression and the press.

The union is also praying the court to grant orders affirming the brutal assault on Olomofe at the behest and presence of the customs officials and their alleged collaborators.

Joined as respondents in the suit were the then Comptroller-General of Customs, Abdullahi Diko Nde, Seme Customs Area Controller, Muhammed Ndalati and a Deputy Comptroller of Customs, Mr Emmanuel Nkemdirim.

Others were Ibrahim Turaki, an Assistant Comptroller of Customs at Seme, Sam Madubueke a.k.a “big Sam of Ibiye”, Suleiman Momoh a.k.a “Basket”, one Elijah and Shehu.

The News Agency of Nigeria (NAN) reports that there was no legal representation for the first to fourth respondents at the resumed hearing of the case on Tuesday.

Mr G.U Okaka appeared for the sixth to ninth respondents.
Counsel to the applicant, Mr Jiti Ogunye, invited Olomofe into the witness box to recount his experience at the premises of the Nigeria Customs in Seme on June 25, 2015.

“On that fateful day, I received a call from Ibrahim Nuhu Turaki, an Assistant Customs Comptroller in charge of import, inviting me to the Seme Command of the NCS;
“I had earlier sent a questionnaire to the Command, requesting for its comment on allegation of smuggling of light arms and ammunitions, trafficking of persons, importation of prohibited poultry and dairy products.

“I arrived at the NCS Seme Command at about 5pm in the company of a colleague, MC Dominic Nkempyie of Tide newspaper, and reported to the customs area Public Relations Officer, who took us to Turaki’s office.
“On our way to his (Turaki) office, I observed the presence of Momoh, Madubueke, Elijah and Shehu (sixth to ninth respondents); I was ushered into Turaki’s office by the PRO, and Turaki insisted that the PRO should stay and be a part of the meeting.
“He also sent for the Deputy Comptroller (Nkemdirim) and then asked Madubueke, Momoh, Elijah and Shehu to come into his office to be a part of the meeting.
“In response to the questionnaire, Turaki and Nkemdirim explained to us that it ought not to be a question and answer segment, adding that as journalists, we could get to the root of investigations and gather our reports.
“They therefore said that they could not answer the questions.
“After the meeting, we made to leave but then, Ndalati (Seme Customs Area Controller) came to the threshold of Turaki’s office and said to Turaki and Nkemdirim (referring to me) “both of you have saved this journalist from my firing squad today, otherwise, there would have been ambulances to convey casualties from here”.
“I immediately said I was sorry and that I meant no harm but only bent on promoting good relationship with the NCS, and then I respectfully opted to leave.
“Before I could move out, I was pounced upon by some ferocious men led by Momoh, Shehu and Elijah who are notorious for their border activities; and I heard them say “You will die here today, so that journalists will learn to leave Seme border alone, we will kill you and nothing will happen.
“I was beaten to stupor and one of my eyes was almost blind with blood, I was then dumped in a pit and from the pit, I heard Ndalati telling the others that they had beaten me enough, adding that it will now serve as a warning to other journalists.
“Following concerns and insistence of some passers-by who identified me as well as attention drawn to me in the pit, I was then taken out from the pit to the Customs Mess Clinic.
“There at the Clinic, Turaki came and apologized to me adding that I was not the target but that they had wanted to maim Mc Dominic Nkempyie.
“I was then taken to another hospital in Badagry and on my way from the hospital; I stopped over at the police area K command to make a statement.
“Eventually, I was taken to Mercure Diagnostic Centre at Oshodi for several medical tests.
“Some days after, I got a call from the then Comptroller General of Customs, (Diko Nde) who also apologised to me over the incidence; he added that the news reports were causing him embarrassment and promised to take up the issue since he was now abreast of it,”
Olomofe said his left eyes remained traumatised as a result of the assault and torture meted on him at the Seme Command of the NCS.
He, therefore, urged the court to allow justice prevail.
After his testimony, Justice Abdulazeez Anka, fixed May 16 for cross examination and continuation of hearing.
In his suit, the applicant is claiming the sum of N500 million as damages against the NCS, for the assault he suffered at Seme border post of the NCS.
Olomofe is also asking the court to declare that the respondents infringed on his right to life “as guaranteed by Section 33 (1) of the 1999 Constitution.”.
He also wants the court to declare “that the assault done to him in the course of discharging his professional duties and obligations, constituted an infringement on his rights to freedom of expression and the press.

Whether Kyari Likes It Or Not, US Will Get Him To Face Trial — Falana SAN

Eid-el-Fitr: Adeoti Felicitates with Muslims, Others