Arms For Volunteers: Irabor Not Sure Army Arms CJTF

The Commander, Multinational Joint Task Force, Major-General Lucky Irabor on Monday expressed uncertainty whether or not the military arms the Civilian Joint Task Force (CJTF). Irabor on Channels Television Breakfast Show, Sunrise Daily said he is not aware of the allegations that the CJTF carry arms. “I am not sure if the Nigerian military is…”
Yusuf
News 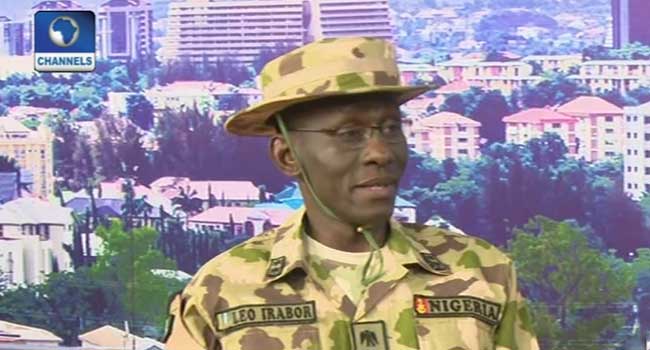 Irabor on Channels Television Breakfast Show, Sunrise Daily said he is not aware of the allegations that the CJTF carry arms.

“I am not sure if the Nigerian military is part of those arming the Civilian Joint Task Force (CJTF). I am aware that they (CJTF) carry arms just like the vigilantes and the hunters carry arms,” he said.

He added that the CJTF plays a crucial role in assisting the military win the war against terrorism in the troubled north-east.

“In fact, the Civilian Joint Task Force as far as I know have been served in the Lafiya Dole for a very long time, many of them also hunters.

“For the national forces, Operation Lafiya Dole has a lot of support with the CJTF. We the Multinational Joint Task Force do not deal with the CJTF.”

While acknowledging the support received from the Borno State Government to the military, the Commander also praised the efforts of the CJTF in extending information.

Upon assuming office last year November, the Commander restated his commitment in consolidating on the fight against the insurgency.

In doing that, he calls for a collaboration with troops from Chad, Niger, Cameroon, Benin Republic respectively.

With its base in Chad, Nigeria plays a leading role in the terrorism war having felt the series of attacks by the outlawed terrorist network.

The military has repeatedly assured Nigerians that Boko Haram would be defeated.