“Our Armed Forces Are Not Neutral”- Theophilus Danjuma

One of the former Minister of Defence and an elder statesman, Lt. Gen. Theophilus Danjuma (retd.), on Saturday, told Nigerians to defend themselves against killers in the country, saying the armed forces were not ready to defend them. Danjuma made the call while speaking at the maiden convocation of the Taraba State University, Jalingo, and…”
Editor
featured News Politics 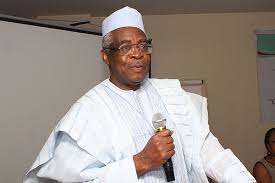 One of the former Minister of Defence and an elder statesman, Lt. Gen. Theophilus Danjuma (retd.), on Saturday, told Nigerians to defend themselves against killers in the country, saying the armed forces were not ready to defend them.

Danjuma made the call while speaking at the maiden convocation of the Taraba State University, Jalingo, and the 10th anniversary of the institution.

The former Chief of Army Staff stated, “I am not a politician and politics is one profession I don’t want to belong to because if I am a politician, I will not say what I am going to say to you now.

“When I arrived in this arena, I saw rich cultural display and I was amazed at the rich cultural heritage of our people. Taraba is a mini Nigeria with diverse ethnic groups living together peacefully, but the peace in this state is under assault.

“There is an attempt at ethnic cleansing in the state and of course, some rural states in Nigeria. We must resist it. We must stop it. Every one of us must rise up.

“Our Armed Forces are not neutral. They collude with the bandits to kill people, kill Nigerians. The Armed Forces guide their movements; they cover them. If you are depending on the Armed Forces to stop the killings, you will all die one by one.

“This ethnic cleansing must stop in Taraba State and other rural states of Nigeria otherwise Somalia will be a child’s play.

The call by the retired general came barely two days after residents of the Takum and Ussa Local Government Areas of Taraba State accused the Army Operation Ayem Akpatuma (Cat Race) of providing cover for the killer herdsmen to attack and kill villagers in the areas.

The Chairman of Takum, Shiban Tikari, and his Ussa counterpart, Rimansikwe Karma, had, on Thursday, while conducting journalists round the villages attacked by herdsmen in their LGAs, accused the operatives of Operation Cat Race, currently going on in the state, of brutality, extortion and providing cover for herdsmen to kill the locals.

Also, at the convocation, the state governor, Darius Ishaku, expressed delight at the growth of the university within 10 years of its establishment.

Ishaku commended the founding fathers of the institution for their foresight in bringing university education to the doorsteps of Taraba people and pledged to continue to support the university to attain a world-class status.

The Vice-Chancellor, Prof. Vincent Tenebe, hailed the state government for its continued support for the rapid growth of the institution, congratulating the 5, 900 graduating students from the first five sets of the university.

Tenebe urged them to be good ambassadors of the institution.

The occasion witnessed the conferment of honorary doctorate on Danjuma; a former minister of the Federal Capital territory, Senator Jeremiah Useni; and Ishaku.

Others were the Chairman of Tony Elumelu Foundation, Mr. Tony Elumelu, and a former Executive Secretary of the Tertiary Education Trust Fund, Prof. Suleiman Bogoro.

Danjuma had, earlier in the day, inaugurated the 6.75km township network of roads in Jalingo, the state capital, constructed by the Ishaku administration.

Meanwhile, two Middle Belt groups and the pan-Yoruba socio-political organisation, Afenifere, have supported Danjuma’s call on Nigerians to defend themselves against killers.

He stated, “For him (Danjuma) to speak about the herdsmen’s killings in Nigeria at this point in time, it means the situation must be getting out of hand due to the negligence of the government or its interest in the enterprise of killings.

“With his strategic position in the world today, every bit of his words should be taken more seriously. I also do not think that this is the first time he is advising Nigerians to be careful with the situation of Fulani herdsmen killings.”

On his part, President, National Council of Tiv Youths, Chief John Akperashi, said Danjuma’s indictment of the military should be taken seriously.

He stated, “By this therefore, the security establishments, especially the military, should be conscious of the reality that it (military) is getting unpopular and Nigerians are fast losing hopes in its capacity to protect and secure both the citizens and entity.”

He however said it was not only Taraba State that was under attack.

The youth leader added, “The entire Benue valley is endangered and there is an orchestrated, premeditated, sponsored and coordinated agenda to overrun the Benue valley through very dehumanising and mind-boggling, demented schemes for which he, Danjuma, should be aware.”

Afenifere agreed with the retired general that the killings were as part of “an ethnic cleansing agenda” which it stated that the people must resist.

Afenifere spokesman, Yinka Odumakin, said, “T. Y. Danjuma has said the truth. If the government cannot defend the people, the people should defend themselves. When you have an IG, who, instead of disarming herdsmen who are carrying weapons, is asking those defending themselves to submit their own arms, that shows clearly that there is an ethnic cleansing agenda and Gen. Danjuma is right in observing it.”

The PDP spokesperson, Mr. Kola Ologbondiyan, says the party will not react now.

He said the security agencies must be asked to talk on the allegation.

Also, the National Publicity Secretary of the All Progressives Congress, Mallam Bolaji Abdullahi, said, “I have no comments.”

Meanwhile, the Defence Headquarters, said, on Saturday, that it would investigate the allegations made by Danjuma and punish any soldier found to be involved in such “unprofessional conduct.”

The Director, Defence Information, Brig. Gen. John Agim, told one of our correspondents that the military would not condone “anybody that sabotages its efforts.”

Agim stated, “Gen. Danjuma is a very respected citizen. If he made that allegation, certainly the military will find out and investigate that claim. And anybody found guilty will be punished accordingly.

“The military has never been known to hide anybody that sabotages the efforts of the military. So, if it is found to be true, such person will be punished. We won’t keep quiet or hide anyone.”