By Chike Iroanya Inspite of owing some categories of workers salary in arrears, the Governor of the state of Osun, Rauf Aregbesola has been described as the best governor that continues to be a reference point of human capital development by the international community.   A United State’s economic consultant made this assertion in Lagos on…”
Editor
hero News Osun Politics 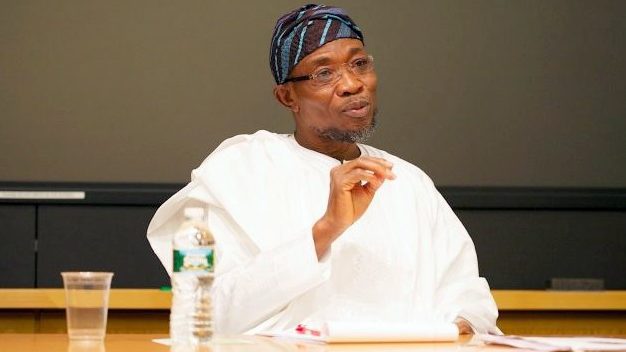 Inspite of owing some categories of workers salary in arrears, the Governor of the state of Osun, Rauf Aregbesola has been described as the best governor that continues to be a reference point of human capital development by the international community.

A United State’s economic consultant made this assertion in Lagos on Wednesday.

He was speaking on “Media and Diversity Reporting” organized by journalists in Lagos.

“Osun and Lagos States remain the most cited examples of good and quality leadership among the 36 states of the federation in international economic and political circles in terms of management of human and material resources in West Africa.

Osun is of particular importance because it is an agrarian state with little resources, dwindling national income but yet has been able to provide enviable records in terms of human development index”.

Chief Segun Ajibulu a tax consultant with the United States and President of South West Professional Forum, (SOWPROF) wrote in an address sent to the organisers.

The address was read on his behalf by Mr Victor Fatunla, an official of the SOWPROF and the Managing Director of Factors Insurance Brokers, who represented the group at the event held at M Square Hotel in Lagos.

In the address, he said he was impressed that international community continues to show interests in what is going on in Osun State for various reasons.

According to him, the media needs to probe deep into what he described as a “revolution in politics and economy” that has taken place in Osun in the past close to seven years.

He urged journalists to engage Osun State constructively so as to rediscover the real story of the state’s success instead of depending on press statements from the opposition.

He said “beyond the false narrative that Osun has not been paying workers’ salaries, it is important for journalists to understand how the state manages to pay workers on levels seven downwards full salary till date inspite of the lean resources. We should find out how the state manages to pay 75 percent of workers’ salary for those on grades seven and below. We should find out how political office holders including the members of the State House of Assembly decide to earn only 50 percent of their pay, how the governor decides not to be paid any salary since assumption of office and above all how the state was able to build secondary and primary schools of international standards in the face of learn resources.”

He said the media has been concentrating on press releases by the opposition figures who take delight in demonizing the state saying that independent observers and members of the international community continue to do independent reports on the state of Osun which puts the state ahead of many of her peers in terms of sustainable development.

“It should interest journalists to know while UNESCO, the world bank and various international institutions continue to partner with the State of Osun. It shows the moral integrity of the leadership of the state.”

He said “It amazes many in the global world how 150,000 computers were given to students, how 500 rural roads were constructed and how the state political leaders make sacrifices for the utilitarian good of the greater society.”

He said diversity reporting means that journalists should deal with substance instead of allowing shadows to assume lives of their own.

He said “This man won the most difficult election in modern Nigerian history. He was the first progressive government to stop the advance of the Peoples Democratic Party, (PDP) in the build up to the 2015 Presidential election. The most vicious military and security machines were deployed against him, having identified him as the leading icon of the incoming government.

“There were security reports that the Federal Government led by PDP needed to demolish Ekiti and Osun States in order to clear the hurdle for 2015 Presidential election. Ekiti fell like a pack of cards. But in Osun, it dazzled the PDP and their agents how Aregbesola fought literally with his blood to bring the PDP on her knees. What led to the victory was the conviction of Osun people that Aregbesola and his team was a better alternative.”

He said the defeat of the PDP in Osun paved the way for the eventual loss of the Federal government by the PDP machine.

Ajibulu said “The Federal Government decided to borrow the school-feed programme from Osun. This is remarkable. If the National Assembly can make sacrifices by taking half of their salary as the political leaders in Osun do, Nigeria will be able to save about 50 billion every month.” No fewer than 35 journalists from the print, electronic and social media attended the event.