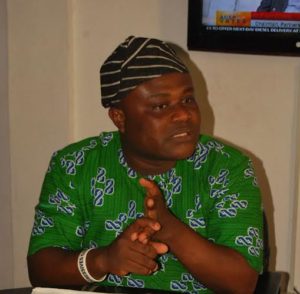 In this interview, Comrade Adeboye Adebayo, a chieftain of the ruling All Progressives Congress APC in the state of Osun and National Publicity Secretary of Asiwaju Grassroots Foundation (AGF), speaks on Governor Rauf Aregbesola achievements, Osun forthcoming governorship election and other sundry issues.

What’s your assessment of Governor Rauf Aregbesola’s administration in Osun State so far?

The Governor has done pretty well in his sojourn as the Governor of the state in the last 81 months or so. He has done a lot in the area of rebranding the state to the state of Omoluabi where everyone sees him or herself as an Omoluabi, displaying the traits of Omoluabi anywhere we find ourselves, we are all conscious of our actions and inactions within and outside state as an embodiment of Omoluabi, we must represent very well. Also in terms of building infrastructure, the Governor has ensured that all the nooks and crannies of the state including rural areas have benefited from one form of road construction, rehabilitation as the case may be. Good schools with serene environment are scattered all over the state with good educational contents for the students and also a balance diet meal per day being given to primary school pupils have indeed raised their mental alertness. Creation of Jobs through OYES programme, 40,000 of hitherto jobless youths are off the street working. Jobs were also created with advent of O’ambulance

Services with which lives are being saved on daily basis especially on our highways and indeed on any emergency calls where lives were involved. There are lots of programme that you also know in Agriculture, Security, Health, Tourism, Sports and many more, the Governor has done greatly well and for me and other citizens, we are fine and very ok with his performances.

Critics of this administration have found a great sin for the government in the areas of half salary and poor education. Do you feel this government should have done better?

There is no doubt every individual will always want to do more in an adventure but availability of resources always hinder us from even performing to our own satisfactions atimes. I don’t understand what you mean by poor education, as far as I know and see, Aregbesola administration has indeed done well in revamping the education sector of the state with obvious results. On the salary issue, I really fault the claims of the critics because we should all be thanking the workforce of the state for showing love and understanding, for their believe that Osun must indeed grow beyond being called a civil service state hence they enter into an agreement with the government through a committee headed by our revered labour leader, Baba Hassan Sunmonu on the modulation of the payment of salaries and other emoluments for workers with clause that the arrangement will always be improving as the money accrued to the state is improving. Do not forget all these that you people are calling half salary is not that half, it is only the most senior civil servants that are collecting half of their pay, the middle cadre collecting 75% of the pay and while the lower cadre collecting the full packages of their pay 100%. So the critics should be reasonable enough to join us in praising Osun workforce for their cooperation with Mr Governor and his team.

The 2018 elections is fast approaching, has key political gladiators in the state to your opinion started building the momentum with sterling agenda for the State?

Yes we have a lot of political gladiators showing interest but non of them from within and outside the governing party APC has shown his plan on how to constructively take Osun to the next level, I mean building on and continue where Aregbesola will stop after his tenure come 2018, maybe they are waiting for the party to lift ban on the campaign to avoid unnecessary heating up of the polity. Though some of them are serious, some noise makers, some are rabble-rousers and some are just jesters.

Your party, the All progressives Congress APC, recently lifted the ban on campaigns by would be aspirants, do you think it’s right placing a ban in the first place?

I don’t think the ban has been lifted, has it? Yes it is very right to place the ban in the first place to avoid unnecessary distraction for the incumbent government and also to avoid heating up the polity unnecessarily. Yes it’s damn right.

With the ban lifted, how soon should gladiators swing into action?

Yes if the ban is lifted I expect the serious ones among the gladiators to swing into actions immediately by telling us their agenda for development, while rabble-rousers will continue rabble-rousing, the noise makers will continue making noise while the jesters will fade away.

Who do you think should be the next Governor of Osun State?

The next Governor of the State should be God-ordained, he should be a person that fear God and loves humanity. He should also be man of the people not arrogant nor a pretender. He should also be ready to build on what Ogbeni has founded and like Ogbeni, he must believe that power is indeed responsibility and that politics is only useful when it is directed at serving humanity and solving people problems.

Do you also agree to the fact that Osun West Senatorial District is the next in line to produce the next helmsman of the state?

For me personally, I don’t believe in zoning, I believe in the capacity of the people, I mean individual wherever they come from to bring development, progress and growth to our state. But the party guidelines will state the position of the party on zoning and everyone will abide by it but for me, I don’t like zoning.

Do you see the Peoples Democratic Party as a party that can take over the reins of power from the ruling party?

No no no, no way. The PDP has done enough damages to the land as a whole and I think Nigerians starting from Ekiti to Osun both in 2018 elections and to the general elections in 2019 will start rejecting them as ever. The party is a disaster and bad omen; you should not be talking about it. God forbids taking over by them, hell no, never.

Between Hon Lasun Yussuff, Alhaji Moshood Adeoti, Alhaji Gboyega Oyetola, Barrister Kunle Adegoke, Hon Sunday Akere who are all card carrying members of the APC, whom do you think the cap fits?

To you, with the current political brigandage between Fatai Diekola, Ajibola Basiru, and Asiwaju Tunde Badmus over who controls Osogbo’s direction in the forthcoming elections mean?

None of them to me has the capacity to control Osogbo’s direction; they can only control some fraction of the city. However, the generality of Osogbo people who are accommodating, not self-centered, not ingrate will definitely reward Governor Aregbesola with their support and votes come 2018. I know they will definitely go in the direction of Mr. Governor, Osogbo has never had it so good like this, see massive infrastructure development everywhere, recreation centres and other beautiful things and sights. Do not reduce the narratives of Osogbo’s election direction to an individual or group of people but massive good works of the governor in the city will give the said direction and trust Osogbo people, they are not ingrates.

As an experienced politician, do you think Rauf Aregbesola has got the ability to manage the pending political crisis in Osun with the array of gladiators racing for Abere?

God in his mercy who is the Supreme Being that controls the affairs of the earth will definitely guide him, support him and indeed give him adequate wisdom to manage successfully what you mean by pending political crisis which I am not seeing. I believe Mr. Governor has the ability to manage any crisis politically, so no cause for alarm.

Modulated Salary, Bad economy, Pensioners Untiring Protests and The Hunger in the land, will APC reclaim Osun in 2018?

See all these things you have mentioned are not peculiar to Osun even Ondo, Kogi States are currently discussing modulated salary payment with workers, Benue workers are currently on strike on the issue of salary, ASUU and the Association of Resident Doctors are up in arms against Almighty Federal Government because of salary and emoluments issues so why the hullabaloo is so loud in Osun. Bad economy is a national thing, Osun or Aregbesola does not run economy policy for Nigeria. We have all attested to it including you that the protesting pensioners are political tools in the hands of the opposition as part of their own strategy and so all of these cannot in anyway affect the result of the election after all, all of us including APC members and leaders at all levels are affected by outgoing economic recession. So for Osun 2018, our great party APC will come out victoriously at the poll and the feat will be repeated in 2019 by the special grace of Almighty God.

Are you in support of Youths getting elected into public office?

Yes, why not but we need to prepare ourselves more adequately intellectually and otherwise in terms of weapons not arms or ammunition but all ideals that will enable us to stand and win elections in this country. As a young man, I just lost a well fought local government chairmanship election in Lagos, heaven didn’t fall but great lessons were learnt. So Nigerian youths should not allow the fear of unknown to debar them from taking risk of participating in a contest to a political office in Nigeria, our colleagues are doing that very well in other African Countries and abroad. They say it is good to risk as a young man, if you win, you can lead, if you loose, you can guide. As a matter of fact, I am an advocate of a man Governor & a Youth deputy in this Osun 2018.

In two sentences, describe President Muhammadu Buhari and his government in the last 2 years?

A man who meant well for the good people of Nigeria and willing to change the tide positively but being resisted by evil forces that does not want our country to grow, God will help us to survive.

Sanwo-Olu declares he is mentally stable