By Sodiq Lawal The governorship candidate of the All Progressive Congress (APC) in the State of Osun, Alhaji Gboyega Oyetola, has received the royal blessings of the Ooni of Ife, Oba Adeyeye Ogunwunsi on his aspiration to become the governor of the state. Oyetola, who with his running mate, Benedict Olugboyega Alabi, the governor of…”
Yusuf
featured Osun Politics 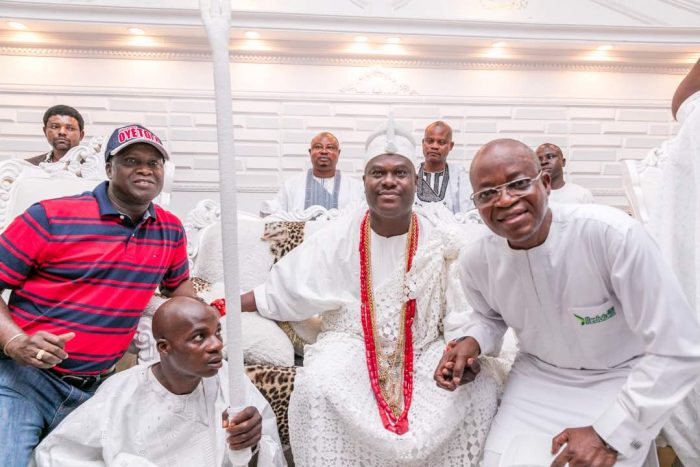 The governorship candidate of the All Progressive Congress (APC) in the State of Osun, Alhaji Gboyega Oyetola, has received the royal blessings of the Ooni of Ife, Oba Adeyeye Ogunwunsi on his aspiration to become the governor of the state.

Oyetola, who with his running mate, Benedict Olugboyega Alabi, the governor of the state, Ogbeni Rauf Aregbesola, deputy governor, Otunba Titilayo Laoye-Tomori, Mrs Sherifat Aregbesola, the wife of the governor, APC chairman, Gboyega Famodun, Senators, honourables and other party leaders kicked off the party’s mega rallies in Ile Ife on Tuesday and visited the royal father at his palace, where he said it became important for him to receive blessings from the throne as he considered Ile Ife as the source of all Yorubas. Earlier, the governor had lauded the Ooni for his support to his administration and for the giant strides he has made in developing Ile Ife and Osun.

According to the governor, ” this is our second time of coming here. The first time we came, we came to tell you about my plans to handover power to my successor that I was yet to know then but now we have come to seek for your royal blessings to my successor who will be the next governor of the state. “We believe that Ife is the source of Yoruba race and it is our culture to always seek your royal blessings during this political era.”

Aregbesola said the contributions of Oyetola who served under him for 8 years as the Chief of Staff were enormous and he would continue to remember his spectacular roles in the areas of his service.

He expressed satisfaction that the APC governorship candidate is widely respected as very sincere, loving, focused, considerate, helpful and above all a good ambassador.

While addressing the audience, the APC governorship candidate commended the efforts of Governor Aregbesola in improving the standard of Osun, describing him as a trustworthy governor.

Oyetola promised to work on the continuity of the good works of the governor and to ensure the State of Osun transforms to an ideal environment.

“I have been part of this government for almost eight years. Ordinary, if a person learns a work for just two years, he must have become a boss in the field of the work. So, I have seen that a government provides a platform for you to be able to serve a greater part of the society and having been in government for about eight years, I believe there is need for continuity. We should not stop at where Governor Aregbesola will stop after the expiration of his tenure. The state should continue to enjoy the kind of infrastructure and socio-economic  development that have been put in place,” he said.

Oyetola promised to fix dilapidated roads across Osun and reduce the suffering of the people of Osun.

He added that health centres and hospitals in the state would be upgraded, as well as the transformation of the education sector.

The Ooni then prayed for Oyetola and Alabi for about two minutes. The Ooni of Ife, Oba Adeyeye Ogunwusi Ojaja II urged the APC flag bearer to always act like a servant in his quest to develop Osun.