Juventus coach Massimiliano Allegri insisted he would not be getting depressed despite criticism at failing to land the killer blow against Tottenham in their Champions League last 16, first leg clash in Turin. “If anyone thought that Juventus would win 4-0 this evening he was way off track,” blasted Allegri, after his more experienced side…”
Yusuf
Sports 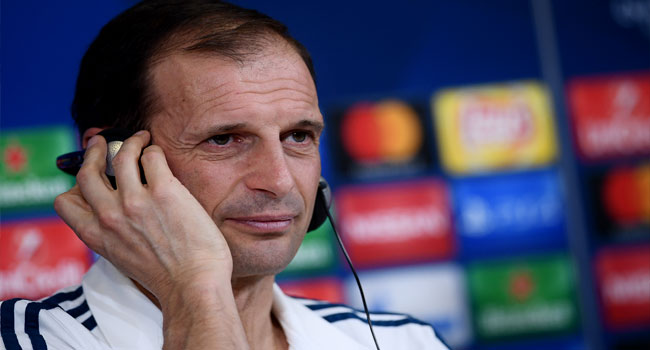 Juventus coach Massimiliano Allegri insisted he would not be getting depressed despite criticism at failing to land the killer blow against Tottenham in their Champions League last 16, first leg clash in Turin.

“If anyone thought that Juventus would win 4-0 this evening he was way off track,” blasted Allegri, after his more experienced side threw away a dream start with two Gonzalo Higuain goals inside ten minutes to end with a 2-2 draw in front of their frustrated fans at the Allianz Stadium.

“The Champions League is a dream and an objective, but winning it is not easy. I think people have lost some objectivity here. Juve play to win, but they are not the favourites. You can’t reach the final every year,” said Allegri.

Higuain got the first goal after 73 seconds, and minutes later added a second from the spot after Ben Davies’ foul on Federico Bernardeschi.

But Harry Kane revived Spurs hopes after half an hour, with his seventh goal in the competition this season, rounding flattened goalkeeper Gianluigi Buffon.

Higuain missed a second penalty before the break following Serge Aurier’s reckless challenge on Douglas Costa to keep the English side in the game.

Christian Eriksen scored Tottenham’s second goal from a free-kick after centre-back Giorgio Chiellini fouled Dele Alli, sending it low past a wrong-footed Buffon, leaving all to play for in Wembley on March 7.

“It’s like we lost 8-0 — good doctors are needed, not one, but many very, very good,” Allegri berated journalists at the post-match press conference.

“Football is like this, we went from 3-0 to 2-1, we had a 3-1 penalty and instead Tottenham equalised 2-2,” explained Allegri of the game. “I believe the lads are putting in a fantastic season, but that’s a long way off thinking they can win a last 16 match by a 3-0 scoreline.”

– Three-pronged attack –
Juventus are bidding for a seventh straight Serie A title this season, and are just one point off leaders Napoli. They are also in the running for a fourth straight Italian Cup, and to reach the final of the Champions League for the third time in four years.

“People must realise that winning is not normality, it is extraordinary,” continued the former AC Milan boss.

“I will not accept that tonight’s 2-2 draw could depress the Juve fans. There are some scary ups and downs in the mood here.

“This really irritates me, because people have no idea of how teams function. The primary objective is the Scudetto: it’s not easy. Then we’ll try to go forward in the Champions League.

Spurs boss Mauricio Pochettino said his side “showed character” in a competition where their best finish was the semi-finals in 1962.

“We’ve shown great personality against a team that has played two finals in the last three years, my players have been fantastic.

Eagles Captain, Musa To Team Up With Kano Pillars