The people of Essien Udim Local Government Area of Akwa Ibom State are in the grip of panic arising from the activities of a vicious cult gang, Akwa Marines, said to be sponsored by Mr. Godswill Akpabio, Senate Minority Leader and former governor of the state. The group, led by one Emmanuel Ben, SaharaReporters reliably…”
Editor
News 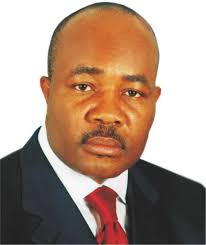 The people of Essien Udim Local Government Area of Akwa Ibom State are in the grip of panic arising from the activities of a vicious cult gang, Akwa Marines, said to be sponsored by Mr. Godswill Akpabio, Senate Minority Leader and former governor of the state. The group, led by one Emmanuel Ben, SaharaReporters reliably gathered, has been spreading terror around the local council for over a decade.

People in the council area are therefore calling for the prosecution of Ben and his gang as well as the restoration of peace in the area. Already, gang members are said to have started attacking those they suspect of providing information on their activities to the Police.

Local sources said the group enjoys the support of other powerful and influential politicians, the reason it has enjoyed a free reign in Essien Udim, Mr. Akpabio’s local council. Ben is also said to hail from there.

In 2014, Ben was said to have imposed a levy, dressed up as “security votes”, on traders during the communal harvest known as Oto-Okom. The levy, which was paid, was only recently challenged by a few brave members of the village. In February 2016, SaharaReporters was told, the gang carried out a robbery in the village market known as Urua Nsong Eto.

The cult group was also said to have kidnapped one Celestine Mel Ikpa (then a staff of Nigeria Deposit Insurance Corporation). On release from captivity, Ikpa reported to the Police, which arrested and charged the abductors to court except the gang leader.

Sources, however, disclosed that they were murdered for their refusal of offer of initiation into Akwa Marines. Udom’s mother, Madam Nse John Udom, was said to have told the Police that she saw her Akwa Marines members inflicting machete cuts on her 16-year old son and begged Ben to spare his life. The Akwa Marines leader, the traumatized woman was said to have told the Police, also ordered the victims’ bodies burnt. She subsequently fled the community.

A few days later, Ben, said sources, convened a meeting in the village square, where he took responsibility for the murder, saying there was a need to rid of community of goat thieves.

He was also said to have bragged that reporting him to security agencies would have grave consequences, adding that he has them all in his pocket all the security agents have been settled.

Apart from Ben, those who participated in the twin murders were Lucky Effiong Akpan (aka Pope), Marcus Ikut (aka Mbata), the group’s executioner-in-chief, and Philip Udo Udo Ben. Other members stood cult group stood by to watch as though it was a spectator sport.

The murdered Friday Udom was a cousin to one Victor Udom who, along with Samuel Ikpa, a staff of Exxon Mobil, narrowly escaped assassination during a visit to their community in Midim. The assassination plot was hatched by Ben, Uduak Etim Udom and one Chrisanthus George Udoh.

The near-victims were rescued by a team of policemen on special surveillance duties. The team, led by one Mr. Effiong, an inspector, was said to have been alerted by indigenes. The matter was reported at the Divisional Police Station in Afaha Ikot Ebak, Essien Udim Local Government Area. However, the Police officers were reprimanded, ordered disarmed and subsequently detained by the Divisional Police Officer on the say-so of Mr. Nse Ntuen, the then Chairman of Essien Udim Local Government Area and an Akpabio partisan.  Mr. Ntuen, disclosed sources, claimed to have relayed the instruction of Mr. Akpabio, with whom he was in constant communication. Mr. Akpabio is from Essien Udim.

Last month, the gang broke into homes in the community, taking belongings from owners and destroying properties, an event that provoked a flurry of petitions to the Essien Udim Divisional Police Command, Area Command and the state Police Headquarters. But the Police have not been of much help. Two weeks ago, a victim said a policeman attached to the Essien Udim Police Command warned him against making distress calls whenever the gang decides to attack. The policeman was said to called key members of the gang on his phone in the presence of the victims.

Ben, the gang leader, was recently arrested by officers from the Inspector-General of Police Intelligence Response Squad, a development that was said to have brought out political heavyweights and traditional rulers in the state to demand his unconditional release. He was, however, moved to Abuja. There are indications that plans are being finalized to have him moved back to Uyo, the state capital, where the Attorney-General of the state will arrange for him to be freed.

Ben’s connection to powerful people, said local sources told SaharaReporters, was proved on 8 March at the High Court of Akwa Ibom State, where he was sprung from could also be gleaned from charges of cultism, murder, armed robbery and kidnapping among other atrocities. Delivering judgment on the matter (Suit No. HT/FHR/10/2017) Justice NFN Ntong of the Ikot Ekpene Division of the state High Court ordered Ben’s release. Last year, Justice Ntong made the controversial ruling restraining the Economic and Financial Crimes Commission, the Independent Corrupt Practices Commission and Police from investigating any past or present Akwa Ibom State government official.

Manhunt Launched For Man Who Stabbed His Girlfriend To Death