Ajax and Juventus draw 1-1 in the first leg of Champions League quarter-final. Cristiano Ronaldo’s flying header on the stroke of half-time gives Juventus a slight edge over Ajax after Wednesday’s breathless first-leg draw in Amsterdam. Ronaldo subdued the 50,000 home fans in the Johan Cruyff Arena when he headed Juventus in front on the…”
Yusuf
Sports 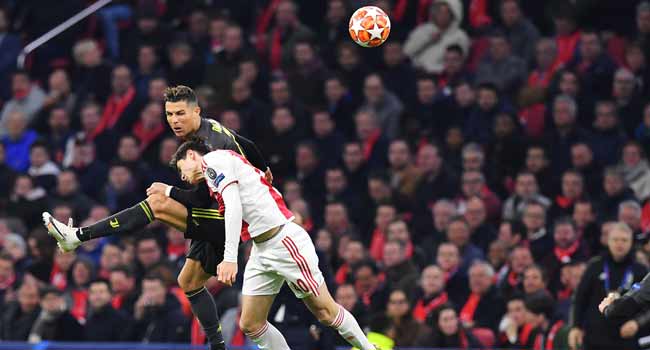 Ajax and Juventus draw 1-1 in the first leg of Champions League quarter-final.

Cristiano Ronaldo’s flying header on the stroke of half-time gives Juventus a slight edge over Ajax after Wednesday’s breathless first-leg draw in Amsterdam.

Ronaldo subdued the 50,000 home fans in the Johan Cruyff Arena when he headed Juventus in front on the stroke of half-time to take his record goal tally in the competition to 125.

Brazilian winger David Neres conjured a stunning equaliser almost immediately after half-time to give Ajax a draw that was the very least they deserved.

However, it is Juventus — for whom substitute Douglas Costa struck a post late on — who hold the upper hand heading into next Tuesday’s return in Turin, with the winners of this tie facing Manchester City or Tottenham Hotspur in the last four.

Ronaldo was back for his first appearance since suffering a thigh injury playing for Portugal last month — it was his first game for Juventus since netting the hat-trick that dumped out Atletico Madrid in the last 16.

The 34-year-old is aiming to win the trophy for the fourth year running, while Ajax are appearing at this stage of the competition for the first time since 2003.

They had set up this tie by ending Real Madrid’s European hegemony in the previous round after a thrilling 4-1 victory in Spain.

Erik ten Hag’s brilliant young side is likely to be broken up at the end of this campaign, so this may be the Amsterdam club’s best chance in a long time to win a fifth European Cup.

Frenkie de Jong is leaving for Barcelona, and the 21-year-old’s eagerness to get on the ball and start moves here underlined why the Catalans were prepared to pay an initial 75 million euros ($84.5 million) in January to secure his signature.

However, it was the Moroccan international, Hakim Ziyech, who was the most prominent going forward in the first half — one curling effort in the 18th minute was heading for the top corner before being tipped over by Wojciech Szczesny.

Ajax certainly should have scored in the 25th minute when Dusan Tadic set up Donny van de Beek inside the box, but his shot went agonisingly wide.

Juventus only displayed their attacking threat in patches, with Federico Bernardeschi lively and Ronaldo hooking one chance wide.

The latter had been kept largely quiet, but he was afforded too much time and space by the Ajax defence as he opened the scoring with the last act of the first half.

Ronaldo collected a pass from the elegant Rodrigo Bentancur, spread the play to Joao Cancelo and then ran unhindered in a straight line into the box to head home his compatriot’s perfectly flighted cross.

Andre Onana got a touch, but could not deny Ronaldo his 25th of the season — he has now scored six Champions League goals at the Johan Cruyff Arena, as many as ex-Ajax star Zlatan Ibrahimovic.

The Ajax fans greeted their team’s return for the second half with a rendition of Bob Marley’s Three Little Birds, and they were still belting out the words to their adopted hymn when they equalised within a minute of the restart.

Neres robbed Cancelo by the left touchline just inside the Juventus half and advanced before curling a shot beyond Szczesny and into the far corner.

However, despite exerted pressure after that, Ajax could not get a winner, and Costa nearly delivered a late sucker punch when he struck the woodwork.

Having come back from losing 2-1 at home to Madrid in the first leg of the last 16, Ajax will head to Turin full of hope, although left-back Nicolas Tagliafico will be suspended for the return after being booked here.