25 hectares of land has been donated by the management of Obafemi Awolowo University (OAU), Ile-Ife to the Nigeria Incentive-Based Risk Sharing System for Agricultural Lending (NIRSAL), for agricultural development. The Management made the donation during the Pioneer Launch of NIRSAL National FAM-SMART Model on Monday at OAU Conference Centre, Ile-Ife, Osun. The Managing Director,…”
Editor
Agriculture News 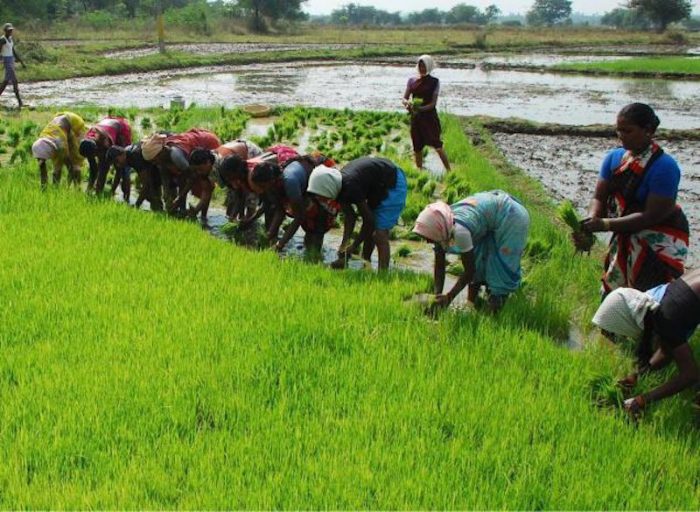 25 hectares of land has been donated by the management of Obafemi Awolowo University (OAU), Ile-Ife to the Nigeria Incentive-Based Risk Sharing System for Agricultural Lending (NIRSAL), for agricultural development.

The Management made the donation during the Pioneer Launch of NIRSAL National FAM-SMART Model on Monday at OAU Conference Centre, Ile-Ife, Osun.

The Managing Director, NIRSAL, Mr Aliyu Abdulhammed, said that the programme aimed to encourage youths to embrace agricultural business, which will benefit them financially now and in the nearest future.

Abdulhammed added that NIRSAL has trained over 700,000 people on good agronomic practices, and had assisted over 500,000 farmers financially.

The director said that this was part of its strategic focus on transforming agriculture in Nigeria.

He said that the FAM-SMART has formally launched a unique farming model at OAU, basically to simultaneously empower small holder farmers in other to boost agricultural production on structured and sustainable basis.

According to him, the model, FAM-SMART is an acronym that stands for Farm Aggregation Model for Smallholder Agriculture based on Technology.

“It is a rule-based, market-led and technology-driven system of primary production agriculture designed by NIRSAL for smallholder farmers.

“NIRSAL anchored three principles such as: aggregation, structured group dynamic and Proportionate cost and profit sharing in order to achieve economies of scale, maximum output and maximum profit” he expressed.

The managing director maintained that NIRSAL was established in different parts of the country to serve as operational hubs for FAM-SMART.

Abdulhammed maintained that first public launch of Ife project valued the respect NIRSAL placed on partnering with the University based on projection between 80 per cent and 90 per cent of a typical per hectares.

“FAM-SMART is an attractive investment opportunity for banks and the entire financial services sector.

“A conservative estimate of 1000 geo-cooperatives producing a gross output of 1,250,000 metric tonnes of grain will generate a gross revenue of N125 billion.

“NIRSAL is a new paradigm in agricultural primary production in Nigeria, which provides a structured production technology, which was attractive to service and input rewarding for smallholder farmers.

Also, Mr Akeem Abimbola, the Technical Field Scientist, Syngenta, showed his appreciation to be partnering with the NIRSAL project, saying the NIRSAL has perfected every aspect of the project.

Abimbola stated that NIRSAL was the one that pioneered rice production across the country.

He called all and sundry to focus on agriculture, saying oil and gas has failed Nigerians, but only agriculture is a way to ensure sustainability.

Also, Mr Samil Asha, the Managing Director, SCAGRIC Investment Limited, said that he has been coordinating many projects and investments, saying that NIRSAL and OAU project will not be an exemption.

Asha explained further that NIRSAL finances the project with 65per cent, while his agency also supported with the remaining amount of 35 per cent.

He pledged his support in coordinating with the project in other to jointly succeed in promoting agricultural growth and development across the country.

The Ooni of Ife, Oba Adeyeye Ogunwusi, Ojaja II, who was visited in his palace, acknowledged the efforts of the NIRSAL for the initiative, saying that the programme will boost agriculture and national economy.

Ooni said that he was happy for the programme was first launched at OAU, Ile-Ife, adding that at the end of the project, Ile-Ife will lead, while other neighbouring towns will follow.

The royal father, who followed them to unveiled the 25 hectares of land given to NIRSAL by OAU, urged the youths to embrace and promote the programme.

In his remarks at the event, OAU Vice-Chancellor, Prof. Eyitope Ogunbodede expressed the appreciation of the institution to NIRSAL for initiating the FAM-SMART project in the university.

Ogunbodede recalled the central role that the university played in achieving the agricultural successes in the old Western Region.

He stated that OAU is both qualified and prepared to maximise the opportunity.

“NIRSAL has provided the opportunity to train our students in the Faculty of Agriculture to acquire practical experience in mechanised agriculture and agribusiness,” he said.

According to him, the Institute for Agriculture Training and Research (IAT&R) was affiliated to OAU to assist in achieving the three A’s such as academics, agriculture and aesthetics.

He said that he was not surprised that NIRSAL partnering with OAU now, would ascertained that OAU is blessed with a faculty that has some competent professionals in various field of agriculture, which was supported by SCAGRIC.

According to him, the collaboration with NIRSAL will be a great opportunity for the faculty to give him more experienced personnel and students in mechanised agriculture and agribusiness.

The VC opined that NIRSAL will support the institution in the next phase of the project so as to increase teaching and research farms to 1000 hectares from 25 hectares earlier given.

He pledged that the University management would provide necessary support to ensure that NIRSAL succeeded in carrying out the projects.

Ogunbodede added that FAM-SMART will provide comprehensive financing to support farmers by anchoring them with input suppliers, mechanization service providers, market, financial Institutions among others in order to ease and make production and economic viable.

“FAM-SMART will take full advantage of available technologies to minimise the rigours associated with primary production and maximise output.

“The new model will also create an enabling environment for supply of inputs and other primary production services on credit arrangement leveraging on NIRSAL’s insurance and CRG facilities as well as provide relevant training for farmers supported under it.

“Co-funding and profit sharing by all suppliers of mechanisation inputs, off-take and farm management services.

” Under FAM-SMART, these are not mere service providers that walk away but project partners that bring in value and wait to see the outcome before receiving their share of benefits at project end,” he said.

Buhari Nominates Lauretta Onochie As NDDC Chair, Other Board Members