The Asiwaju Grassroot Foundation (AGF) has congratulated the national leader of All Progressives Congress (APC) Asiwaju Bola Ahmed Tinubu as he was honoured with Honorary Doctorate Degree by Ibrahim Badamasi Babangida University, Niger State. Asiwaju Bola Ahmed was presented the Doctor of Humane at the 3rd combined convocation ceremony of the university in recognition of…”
Yusuf
News 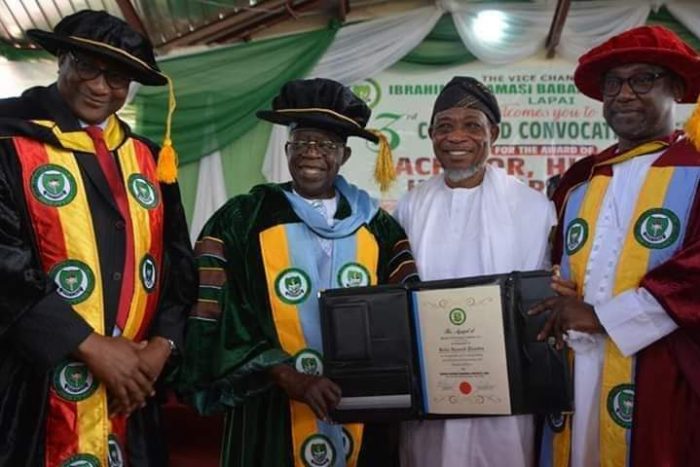 Asiwaju Bola Ahmed was presented the Doctor of Humane at the 3rd combined convocation ceremony of the university in recognition of his outstanding contributions to humanity and democratic system.

In a congratulatory massage signed by the foundation’s National Coordinator, Hon. Olateju Ishola and made available to CityMirrorNews in Lagos, commended the University Council for the Honourary award, stressing that the award has reaffirmed Tinubu’s contributions to education and human development in the country.

The foundation noted Tinubu’s service to humanity informed the decision of the University management give honoured him with award adding that the award is just the beginning of many that will come his way.

“On behalf of the Foundation, I congratulate our principal, Asiwaju Bola Ahmed Tinubu over the approval of his honorary Doctorate Degree award by the Council of Ibrahim Gbadamasi Babangida University, Lapai.

“It is instructive to say that Tinubu’s investment in education speaks volume and worth mentioning as education is so important because every other form of development, in the end is brick and mortar”, Olateju added.

I Have Spent $9b On Power – President Buhari

FG Urges Shell, Chevron, Others To Allow Third Parties Use Of Their Pipelines