EDITORIAL: Parliament Against The People?

If we had expected the National Assembly to utilise the ongoing constitutional amendment to douse separatist agitations across the federation, their volte-face on the bill which sought to alter the Second Schedule, Part I & II to move certain items to the Concurrent Legislative List to give more legislative powers to states has shown how…”
Yusuf
Editorial Op-Ed 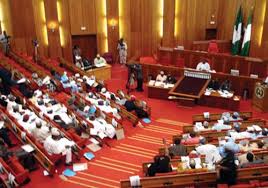 If we had expected the National Assembly to utilise the ongoing constitutional amendment to douse separatist agitations across the federation, their volte-face on the bill which sought to alter the Second Schedule, Part I & II to move certain items to the Concurrent Legislative List to give more legislative powers to states has shown how far the national legislature is from the people. In an exercise that will go on record as a terrible misrepresentation of the people’s will, the Senate shut down the bill on Wednesday and the House of Representatives followed suit a day after. By that, what could have been a pragmatic response to the current chant for the restructuring of the unwieldy and unworkable Federation was cynically aborted by the so-called representatives of the people.

We consider such abortion tragic. Tragic because much as we do not pretend that the restructuring as being canvassed by some agitators is the magical silver bullet to cure the country of its many ills, it seems the best shot at getting the country out of its current despondency and the continuing withering of the nation’s institutions. Today, we find the correlates in the total collapse of the physical and social infrastructure across the federation, the unparalleled crime wave, the unprecedented youth unemployment and general alienation of the citizenry among other ills that has continually been retrogressing the nation.

On what grounds do our so-called distinguished parliamentarians stand on to justify the retention of the status quo – if we may ask? Are they happy that states which ought to be centres of economic activities are no more than leeches on an equally unproductive but mindlessly extractive federal government?  What is there to celebrate in the so-called federation in which the central government holds the levers of economic power, even when it has no clues on how to exploit and maximise its vast treasures let alone getting same to work for the benefits of its people?

Another is the centralised police that has become a bye-word in corruption and inefficiency –even at time criminal gangs of different hues and sophistication are off the leash? Is it a case of our lawmakers being blinded by the perks they currently enjoy in Abuja to the point that they can no longer see what the rest of us see and live with on daily basis?

Why do we need to get the power devolved to states at this time? First, the current fiscal arrangement under which the country’s entire revenue is first taken into a central pool and later shared is anomalous; over time, the practice has lulled most states into the false sense of financial security as oil freely flowed. Today, the new reality imposed by falling oil prices has rendered the practice unsustainable.

Second, most states are known to be sitting literally on gold mines; unfortunately, the minerals and everything beneath the soil remains the exclusive preserve of the federal government. With the responsibility devolved to the states, the potentials of the states can thus be unleashed not just to enable them to contribute to the overall national wealth, but also to create mass employment.

As for the security, we do think that the country has long passed the point where anyone would justify the retention of the current security architecture. Whether it is tagged state police or neighbourhood watch, there is evidently a growing consensus that the country currently requires a new framework of multi-level policing.

If truly, real sovereignty belongs to the people, the least we expect from both Houses of Parliament is to revisit the issue as some of their leaders have promised to do – in September. It seems the wisest thing to do in the circumstance.

Marching Away From A State Of Emergency

Men Have To Pack Their Luggage And Dress Appropriately Too