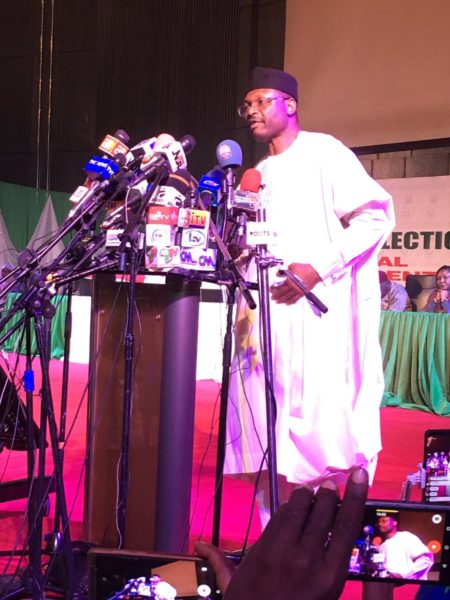 INEC Boss made the disclosure while taking questions from newsmen shortly after unveiling new dates for conduct of the 2023 general elections.
Professor Yakubu said the ongoing campaigns by certain chieftains  in the ruling and main opposition parties contravened provisions of the Electoral Act and the Constitution.

He maintained that presidential  aspirants were not expected to indulge in open campaigns until September 28,2022.

Professor Yakubu dropped the hint that his Commission would soon summon a meeting with the leadership of political parties to call their attention to infractions to provisions of the Electoral Act and the Constitution by their presidential aspirants.

According to him, ” This is not just a matter for the Electoral Act, it  is a constitutional provision that there is time frame for commencement of campaign which is 150 days to the election and there is also a period for end of campaigns which is 24 hours to election.

“So, let me seek this opportunity to draw the attention of parties and candidates that the law makes specific definite provisions for the commencement of campaigns and the end of campaigns and all Nigerians are required to adhere to the provisions of the law including political parties and candidates.
” What we will do very quickly is to hold a meeting with all the political parties in Nigeria and discussed not only this issue of the campaign but all other issues that require the attendance of political parties as provided for in the Electoral Act 2022.”

“On the electronic transmission of results, the INEC Chairman assured Nigerians that his Commission was fully prepared for it.

“From the pilot we conducted, transmitting results to our portal we have covered all the nooks and crannies of Nigeria, we have no challenge, whether it is remote,  rural place or urban areas in transmitting results. So, that convinces us that we can transmit results by uploading polling units level results to the aerial portal in all the 176,000 locations nationwide, remember, we have polling units in over 176,000 locations. So, we are encouraged by the pilot we have conducted and we have no doubt, we can transmit results from all”.

Aregbesola Gave Us The Freedom To Practice Our Belief – Traditionalist