Ahead the general elections in 2019, the Chairman of the Independent National Electoral Commission (INEC), Prof. Mahmood Yakubu, has called on all staff of the commission to be dedicated and committed to flawless elections in 2019. Yakubu gave the charge at a two-day INEC Election Monitoring and Support Centre (EMSC) Zonal Implementers Trainers Workshop held…”
Yusuf
featured News 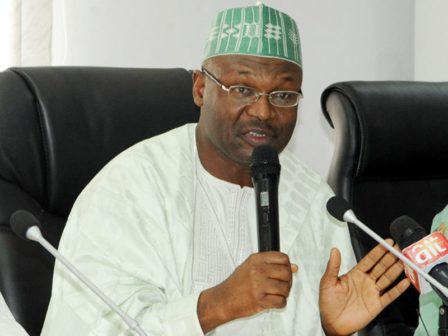 Ahead the general elections in 2019, the Chairman of the Independent National Electoral Commission (INEC), Prof. Mahmood Yakubu, has called on all staff of the commission to be dedicated and committed to flawless elections in 2019.

Our Correspondent reports that the workshop, organised by INEC, was powered by the European Centre for Electoral Support (ECES) for INEC staff from in the South-West Zone.

Yakubu, who was represented by Dr Adekunle Ogunmola, the National Commissioner of INEC in charge of Ogun, Ondo and Lagos States said that, 95 days to the elections, all hands must be on deck.

“We must concert efforts at ensuring that we get adequately prepared for the 2019 elections. Right now, we are very much on course.

“It is expected that all hands be on deck to guarantee the success of the elections. I want to admonish all of us to be committed.

According to him, the commission’s tool for monitoring election is EMSC in order to ensure timely execution of plans within the time frame prepared.

Yakubu, who noted that the INEC was prepared to conduct free, fair, credible and acceptable elections in 2019, called on all stakeholders to support the commission.

The INEC chairman appealed to politicians to desist from do-or-die politics and follow the path of violence-free elections as obtainable in developed and other developing nations.

In his keynote address, Prof. Mohammad Kuna, Special Adviser to INEC Chairman, said that EMSC is a tool designed by the commission to plan, monitor, implement and support field activities toward the 2019 elections.

Kuna said:”We are here today as part of the preparations towards the 2019 elections. We have 95 days to the elections.

“We must discuss with our field officers and find out the challenges in the implementation of our plans for 2019 elections. We need to understand the challenges and seek solution.”

Earlier in his welcome address, Mr Sam Olumekun, the Resident Electoral Commissioner of INEC in Lagos State, commended the ECES for its support to deepen democratic process in the country.

According to him, the recent elections in Osun and Ekiti have further prepared the commission to conduct of flawless elections in 2019.

Olumekun said, “Any effort to develop the workforce is a right step. The conduct of 2019 elections will be more flawless than previous elections.”

In his remarks, Project Coordinator of ECES, Mr Rudolf Elbling, said that the INEC EMSC would help in the execution of the 2019 elections.

Elbling, who was represented by Mr Wilson Manji, the Election Administrative Expert of ECES said: “The workshop is to train electoral officers for proper execution of the 2019 elections.

“ECES is supporting INEC with the funds of European Union to ensure that INEC performs optimally.”

He said that the same training powered by ECES was going on in Niger State for electoral officers in North-Central zone and that the exercise would go round all geopolitical zones.