About 200  operators of crude oil distillation camps referred in local parlance in the creeks as ‘kpo Fire’ camps at the weekend turned up for enumeration of local refineries. They commenced enumeration of artisanal refineries and crude distillation camps ahead of Federal Government’s proposed liberalization of modular refineries. Speaking at the event, Mr. Pat Obiene,…”
Editor
Economy News 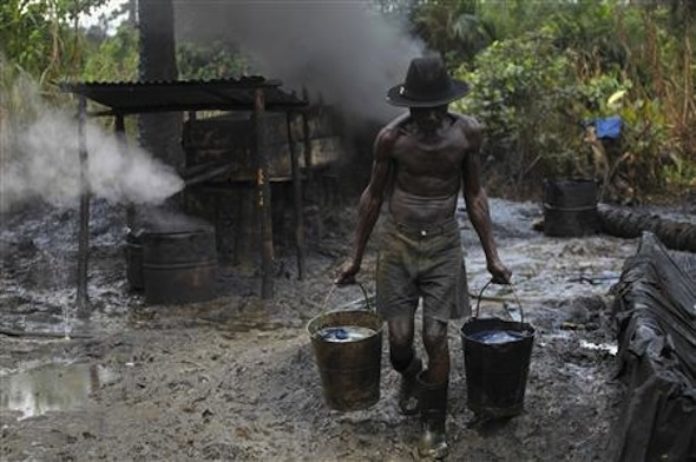 About 200  operators of crude oil distillation camps referred in local parlance in the creeks as ‘kpo Fire’ camps at the weekend turned up for enumeration of local refineries.

They commenced enumeration of artisanal refineries and crude distillation camps ahead of Federal Government’s proposed liberalization of modular refineries. Speaking at the event, Mr. Pat Obiene, a Social Activist who convened the sensitization exercise noted that it was a follow up to federal government’s new policy directive to formalize the artisanal refineries.

The Vice President Prof Yemi Osinbajo had on February 14 during the ongoing tour of oil communities in the Niger Delta region announce the policy of deploying modular refineries to drive economic development of the region. Mr Pat said that, three groups, Masses Congress, Bayelsa Business Roundtable and Modular Refineries Business Association were collaborating on the data collection exercise to determine the total capacity of the local refineries.

“This is a follow up to pronouncement on the federal government’s desire to use modular refineries open up the Niger Delta and fast track development, so we thought it wise to kick start this initiative”.

“It is based on the idea that the society is built by the cumulative efforts of ordinary people, we want to provide reliable and accurate database that the government can rely for decision and planning purposes”.

“We have designed the forms to classify the artisans into Crude Point Owner, Loader, Cooker/ Refiner and Dumpsite Owner to capture data on number of workers, daily crude volume and daily turnover. “The data collected would be processed and analysed andused as a basis to determine to size and capacity of the proposed modular refineries suitable for each location,” Obiene said. Mr Olaitari Ikemike,President of Bayelsa Business Roundtable, an affiliate of African Business Roundtable explained that the initiative was aimed at networking and cross fertilization of ideas amongst stakeholders”.

“This is an effort to bring private sector people together and work for the realization of the modular refinery concept, we need to be a catalyst to bring local refinery operators together and ensure that our peculiarities are factored in. “The pronouncement of the federal government is laudable and we have to support it and make it actualized,” Ikemike said.

Also Mrs Faith Wilkingson, a local manufacturer of lubricants urged women involved in local refineries to embrace the emerging opportunity to add value to the crude oil endowments of the region. She noted that women were the backbone successful enterprises as they were naturally endowed entrepreneurs. Mr Roland Kiente, who operates a local refinery in Peremabiri Community in Southern Ijaw Local Government in Bayelsa appealed for further sensitization at the creeks to enable all operators to register.

“The policy to make artisanal refining legal is a dream come true for us and to guard against this laudable gesture being hijacked by political jobbers, there is need for further awareness in the creeks. “Igbomatoru, Peremabiri remain the epicenter of local refineries and some operators are apprehensive thinking that they will be arrested if they come out,”Kiente said. Also speaking, Mr Clever Oyabara, Chairman, Modular Refineries Business Association in Bayelsa noted that modular refineries would lay to rest the youth restiveness in the region.

“The policy will be a permanent solution to youth restiveness because a 10,000 barrels per day capacity refinery can create more than 5,000 direct and indirect jobs,”Oyabare said.