1,222 Students Sick As Epidemic Breaks Down In Queens College

A laboratory report has shown that since January 2017 over 1,222 students have received treatment for abdominal pain, fever, vomiting and diarrhea. Sixteen students have been admitted to various hospitals in the country, with one currently in the intensive care unit of the Lagos State University Teaching Hospital (LASUTH). This was revealed in a statement…”
Editor
News 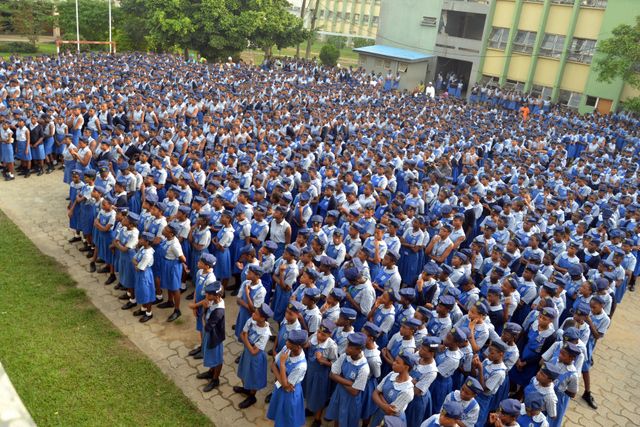 A laboratory report has shown that since January 2017 over 1,222 students have received treatment for abdominal pain, fever, vomiting and diarrhea.

Sixteen students have been admitted to various hospitals in the country, with one currently in the intensive care unit of the Lagos State University Teaching Hospital (LASUTH).

This was revealed in a statement released by Chidi Anselm Odinkalu, the president-general of Unity Schools’ old students’ association. The statement claimed that a recent analysis carried out has shown that the water sources in the school are contaminated by different forms of e-coli and salmonella pathogens. It added that 23 of the 40 kitchen workers have tested positive for amoebiasis, 3 positive for salmonella and one positive for a tapeworm infection.

“The analysis also indicates that the boreholes that provide principal sources of water for the school are too shallow and too close in proximity to the sewage systems, to which the contamination has been traced,” the statement read.

A source at the school who reached out to SaharaReporters attributed the breakout to the school’s poor hygienic environment. One of the kitchen workers also claimed that the school principal, Mrs. Lami Amodu, buys spoilt fish and molded rice at cheap rates for the students’ consumption. She believed that this must have also contributed to the current epidemic in the college.

Already 2 students have been confirmed dead due this outbreak.

Before the news of Bithia’s death was reported in the media, and a day after Vivian’s death became known to the public, QC management had, in a press release, stated that no student of the school died and urged the public to disregard any report about an epidemic in the school.

The school management, in a bid to protect the image of the institution, sent text messages to the parents of the students disclaiming any death.

This move infuriated Vivian’s father, who claimed that the school was trying to cover up the death of his daughter as though her life did not matter to the management of the school.

Mr. Osuinyi told Vanguard newspaper that he was informed about his daughter’s condition only when it had gotten critical. The school had been treating her for malaria days before her parents were contacted. Vivian died four days after she was released to her parents.

Mrs. Itulua, whose daughter died eight days after the school informed her of her child’s deteriorating health condition, has similar story. In an interview with Vanguard newspaper, the bereaved mother said the school was treating her child with analgesic while she was seriously bitten down by a pelvic infection.

“My daughter was at the point of death when I eventually got to the school. She was saying incoherent words. We took her to hospital where diagnosis revealed that she had infections that affected her pelvis. My daughter died on February 22 and was buried the next day”, the mother said.

Bithia’s two sisters, Abigail and Blessing also blamed the school management for the death of their sister.

Abigail, the elder sister in SSS 3, said, “I blame the school authorities for my sister’s death. She had been complaining of headaches and a high temperature while in school. All they did was give her analgesic. It was after she refused to eat and her temperature became extra hot that my parents were called. If they had given her sick permit on time, maybe she would not have died.”

Another student of the school, who requested anonymity, told journalists that the real cause of the two students’ deaths was the contaminated water used in preparing their meals.

Despite the Lagos State government’s recommendation that the school postpone classes till the premises are cleared of bacterial infections, the management of the school has asked its JSS 3 and SSS 3 students to resume without taking necessary precautions to ensure the students will be safe when they return to school.